Reviewing a momentous year in campaigning 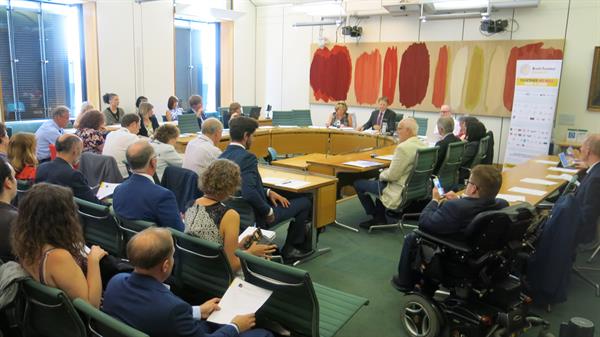 01 August 2018 by Nick Perkins
Brain Tumour Research once again led one of the most exciting and well-attended All-Party Parliamentary Group on Brain Tumour (APPGBT) meetings in the history of the group. On 17th July 2018, the Annual General Meeting was held, with a turnout of over 65 people from right across the brain tumour community and a good cross-party turn out from parliamentarians.

People had come to hear about what a momentous year it has been for gaining funding for brain tumours and to ask questions of Dr Mike Batley (Deputy Director of Research Programmes from the Department of Health and Social Care) about how the new funding and initiatives will be turned into results.

The room was full of energy and optimism as the audience commented repeatedly on how the sector was truly pulling together and how patients themselves felt that there could be more treatment options available soon. When questioned about the new £65 million investment into brain tumours, Dr Batley confirmed that this wasn't necessarily a capped amount. If high quality research applications are received then this amount could be increased.

Several audience members were keen to understand how the recent reports and announcements would all link together - for example how the Petitions Committee report, that our supporters were so fundamental to bringing about, would be taken into account and how the recommendations of the Task & Finish Working Group report on brain tumour research would be included. Dr Batley responded that all of these pieces of work would be considered by the Tessa Jowell Brain Cancer Mission, but that this initiative was only now coming together and, although its four main focus areas were already set, exactly what it directed funds towards was yet to be established.

Brain Tumour Research’s Chief Executive, Sue Farrington Smith, gave a timely reminder of what the funding situation had been when the APPGBT was established in 2004, with just £1 million pounds a year being allocated to research into brain tumours. How far we have come! We are proud to provide the secretariat to the APPGBT and will ensure that future meetings will regularly return to the subject of research funding.

The audience received an update on progress with the APPGBT Inquiry. Several audience members commented on how welcome this spotlight had been and their eager anticipation of the report. Derek Thomas MP commented on how powerful the experience had been for the panel members and how much he had personally learnt about how people are impacted by brain tumours. He thanked everyone for being involved and expressed his strong desire for the report to truly make a difference to the community.

The APPGBT's Chair and Officers were then elected, with Derek Thomas MP continuing in his role as Chair of the APPGBT. He was joined again by Officers Lord Carlile, Kevin Brennan MP and Alistair Carmichael MP. Newly elected Officers this year are Pauline Latham MP, Jim Shannon MP and Baroness Masham. Brain Tumour Research looks forward to working with all of the Officers in 2018/2019 in our capacity as secretariat to help make the work of the APPGBT a success.

A big thank you to all who attended as well as those who wrote to their MP to invite them to the meeting.

If you are not receiving APPGBT invites and would like to do so in the future, please email: appg@braintumourresearch.org