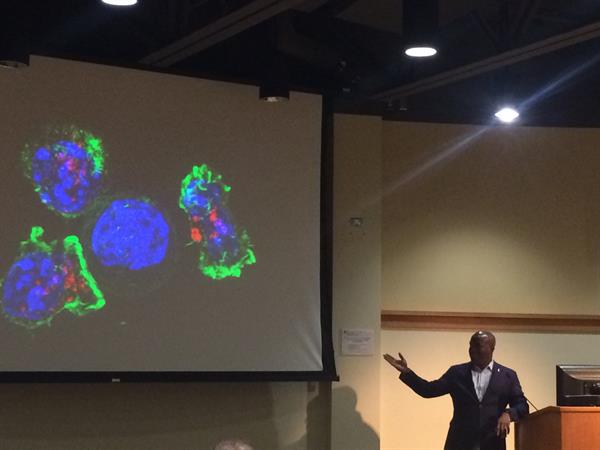 09 July 2018 by Katie Sheen
From June 29 until July 3, the International Symposium on Paediatric Neuro-Oncology (ISPNO) 2018 welcomed over 1,200 researchers, clinicians and funders to Denver, Colorado.

They were all united in their desire to find a cure for children’s brain tumours. The care and concern for families affected by this incredibly challenging disease was palpable.  Some researchers spoke of shedding a tear when children responded well to the new treatments that they are developing, whilst others expressed concern about raising false hope when the media picks up on encouraging results too soon, before long-term effects and relapses can be taken into account. All were united in their desire not just to find a cure, but also to protect quality of life by developing less invasive treatments with fewer or no side effects. Everywhere you could hear people networking, sharing knowledge, making introductions and planning new collaborative initiatives.

One key theme was the importance of understanding more about the subtle differences between the many different types of brain tumour. Historically, biopsies have been looked at under a microscope and a diagnosis given based on how the tissue and cells look. Molecular testing can now investigate genes within each cell, picking up on subtle differences that enable one tumour type to be subdivided into categories that indicate how each is likely to develop clinically. This combined approach has direct benefit for patients because if their tumour is categorised as less aggressive than other subtypes, their treatment can be similarly less aggressive; hence there are fewer side effects. For children, this can make a huge difference because it is so important to protect their developing brain as much as possible.

Once researchers discover a genetic mutation that appears to drive tumour growth, the next step is to identify drugs that influence or target that genetic mutation. This form of targeted therapy is exciting for patients because of its potential to reduce and hopefully eliminate the side effects that are an unavoidable part of existing chemotherapy regimes that affect all fast dividing cells in the body.

If a drug is developed that only targets a particular gene mutation that is in a tumour cell, then a healthy cell without that gene mutation should be unharmed. At ISPNO there were numerous new gene mutations being discussed, and a number of early stage clinical trials are underway for drugs that have shown promising results in laboratory tests. With brain tumours containing so many different types of cells, it is likely that a combination of drugs will be necessary and so all avenues are important to explore.

From nanoparticles to catheters as thin as hairs, getting drugs across the blood-brain barrier and into tumour sites was another important focus. Technology in all forms is playing a big part in helping to move research forwards, with global databases being launched to facilitate the sharing of new knowledge and reduce duplication of effort. Computers can assimilate information in ways that were previously unachievable, and people can connect and collaborate online in ways that were unimaginable 20 years ago. Computer aided neurosurgery has enabled important advances, though imaging still needs to become more sensitive in order to give clearer indications more quickly after treatment as to what is inflammation, scarring or tumour progression.

Immunotherapy was as hot a topic as ever, with a combination of excitement and caution being expressed. It is still unclear as to why some people respond so well and others relapse after treatment, so the overall message is the same as it has always been for brain tumours – we need more research, more resources and more time. However, together we are moving closer to finding a cure.