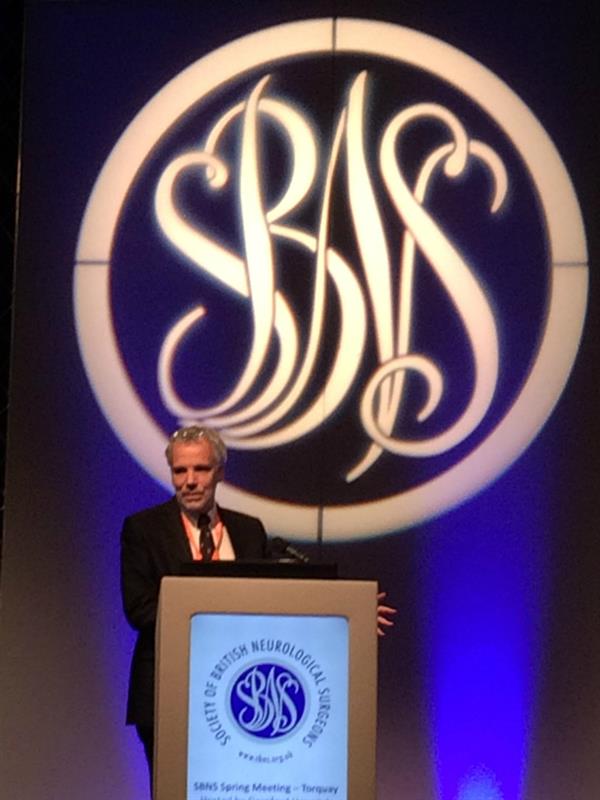 At the Society of British Neurological Surgeons (SBNS) Spring Meeting in Torquay, 11th to 13th April 2018, Prof. Oliver Hanemann delivered an inspirational presentation for this year’s Sir. Hugh Cairns lecture. Prof. Hanemann is Director of the Institute of Translational and Stratified Medicine, Plymouth University Peninsula Schools of Medicine and Dentistry – and head of the Brain Tumour Research Plymouth Centre of Excellence.

Oliver described a number of genes that influence the way that meningiomas, schwannomas and ependymoma brain tumours behave.  At the moment, meningiomas are graded to the World Health Organisation (WHO) Scale, for example Grade 1 or Grade 2: but Oliver pointed out that in future, tumours can be more clearly identified by analysing their genetic makeup so that doctors will be able to tell which ones are likely to become more aggressive, and which ones are safe to leave untreated for longer. In addition, new drugs that target these genes can be developed and tested, initially in the laboratory and then in human clinical trials.

The name “meningioma” was first used in 1922, to reflect the fact that the tumour seemed to have developed from the cells that make up the meninges; the three membranes that enclose the brain and spinal cord. By 1938, scientists Cushing and Eisenhardt had identified nine main categories, divided into twenty sub-categories, within this type of brain tumour. These were simplified in 1941 into four main types, but by 1979 the World Health Organisation (WHO) decided that six different subtypes of benign meningioma, in addition to three more aggressive subtypes, were more useful clinically.

There have been many reviews of brain tumour classifications by WHO since then, with the most recent being in 2016; sixteen different types of meningioma are now recognised. Previously, the grading of brain tumours had been based on how tumour cells looked under the microscope compared to their cells of origin and how different they had become. We now understand that the changes that cause brain tumours to start to develop actually happen at the progenitor stage rather than when a cell is fully formed. The progenitor stage is when a stem cell (that could become any type of cell) first starts to divide and become a specific cell. Identifying the genes that have been damaged during this process of cell division, enables a much clearer picture of individual tumours to be developed.

Since 2016, research has continued to move on in leaps and bounds, meaning that discoveries such as these by Oliver and his team will enable the classifications to become ever more detailed in the future, and therefore more useful for the development of more personalised treatment plans. This will improve outcomes for everyone living with meningioma.

To know that your donations are supporting research that is literally rewriting history is an inspirational thought.  Thank you for your support.