APPGBT report: Brain Tumours – a cost too much to bear? 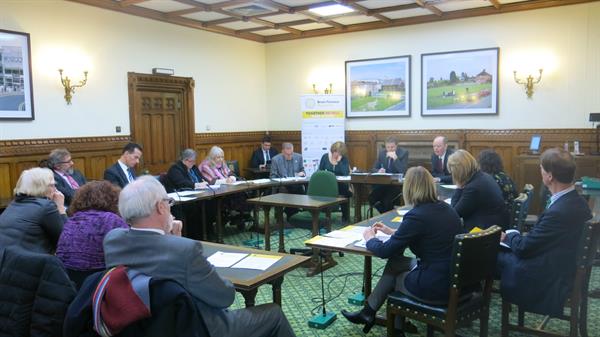 On the 27th February the second general meeting of the All-Party Parliamentary Group on Brain Tumours (APPGBT) for this year was held in the House of Commons and was well attended by MPs and supporters alike, despite the snow thickly falling in London. Parliamentarians in attendance included Liz Twist MP (Blaydon), Bambos Charalambous MP (Enfield, Southgate), Jim Shannon MP (Strangford), and Rt Hon Stephen Timms MP (East Ham), Albert Owen MP (Ynys Mon) and Baroness Masham and the Lord Carlile.

Derek Thomas MP, Chair of the APPGBT, who is very passionate about securing justice for brain tumour patients and their families as well as being personally committed to raising funds and awareness, opened the meeting by setting out his aspirations for an Inquiry. He said, from his own experience with constituents, that he had heard of wide raging and surprising impacts from brain tumours. He was keen to shine a light on these impacts through the lens of a dedicated Inquiry and as a result find ways to improve the situation for patients and their families.

Sue Farrington Smith, Chief Executive of Brain Tumour Research, who provide the secretariat for the APPGBT, then described the kinds of questions that the APPGBT would be asking the public and professionals alike, in order to gain a better understanding of the situation and how the APPGBT would run evidence sessions to this end. The ensuing discussion showed widespread support for an Inquiry of this kind, with suggestions for who could be approached for evidence and how a more holistic approach might be taken that accounts for the impacts of brain injury beyond treatment and also impacts pre-diagnosis. Brain Tumour Research will be supporting the gathering of evidence from the public through the APPGBT webpage hosted on the Brain Tumour Research website from Tuesday 6th March.

The latter part of the meeting was dedicated to providing attendees with an update on the Task and Finish Working Group report, just recently published. Peter Realf provided the group with insight into his input as a patient representative and then Professor Chris Whitty, Chief Scientific Adviser for the Department of Health and Social Care, who oversaw the work of the Group, eloquently set out the Group’s main findings.

He acknowledged the issue of underfunding, but also set out how many obstacles needed overcoming and reiterated the special nature of the brain and how this framed the pursuit of progress. He said that he felt, at this moment in time, that a total cure was not within our easy grasp, but that, in common with progress on other cancers, great gains could be had in both extending the lifespan of those with brain tumours and also normalising their life as much as possible during this time. He spoke of the progress that he hoped to see with the clever utilisation of artificial intelligence and gave assurances that embracing an international outlook will offer significant advantages in terms of patients engaging with clinical trials and trying new drugs.

A big thank you to all who attended and made the event a success, as well as those who wrote to their MP asking them to attend.

At the meeting the passing of David Grant was noted and the meeting was then dedicated in his memory. We would particularly like to recognise the work of veteran campaigner and supporter of Brain Tumour Research, David Grant, who was tenacious in his lobbying for greater funding for vital research ever since he was diagnosed with a grade 4 glioblastoma multiforme (GBM4) in 2005.