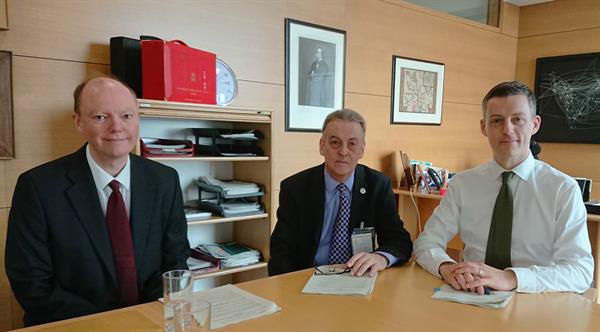 This is such a significant milestone in our journey to a cure and made me reflect on all the things that we have achieved over the last nine years, together with our member charities, researchers, activists, funding groups and, of course, our supporters.

In 2003, I led the coming together of brain tumour charities across the UK. Together, we launched Brain Tumour Awareness Month in March 2004 and inspired Rt Hon John Bercow MP, now Speaker of the House of Commons, to secure the first ever brain tumour debate in the House of Commons.  In July of the following year we supported him to establish the brain tumour All Party Parliamentary Group (APPG) for which I am proud to provide the secretariat.

You joined us in your thousands and should be rightly proud that in just nine years together we have contributed to increasing the national spend as evidenced by the consolidated spend of partners of the National Research Institute (NCRI). In 2009 it was £4.1m (up from £1m in 2002), in 2016 it had grown to £8.5m and the 2017 report will be published in the next few months.

This Parliamentary e-petition led to the first ever inquiry on brain tumours, the first Petitions Committee Report and an unprecedented Westminster Hall debate.

Together, we galvanised our MPs and over 70 of them attended the standing room only event.  The then Minister for Life Sciences, George Freeman MP, was so moved by the passion in the room that he wanted to make a difference there and then and so announced that he would establish a Task and Finish Group.

I was proud to sit alongside Peter Realf and represent you all on the Task and Finish Group.

The meetings weren’t without their politics, as organisations were held to account for the role they’d played in neglecting this devastating disease, as we identified the barriers and opportunities to accelerate progress.

The report sets out the conclusions which represent a clear path to removing these barriers, collaborating and pushing on the doors that have been opened as a result of this process.

We now have friends in the Department of Health, the Medical Research Council and larger cancer charities with whom we can collaborate to seize the opportunities that have been identified and move forward ever close to a cure.

We look forward to sharing the report with you when it is published next week.

Keep an eye on our website and social media feeds for news of this because we will - once again - need your support.

To keep up to date with our research, campaigning and fundraising news, make sure you receive our weekly eNews – sign up here.