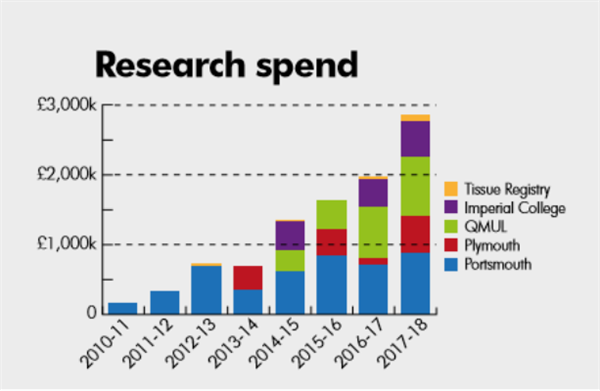 When Brain Tumour Research was launched in 2009, together with our Member Charities we set out to raise awareness of brain tumours and in particular the woeful underfunding for research.

We identified that up until that point, less than 1% of national spend was being spent on brain tumour research despite it killing more children and adults under the age of 40 than any other cancer.

Our role models were the breast and leukaemia charities who had huge public awareness and as a result were able to galvanise the general public and large organisations to support their cause.  At that time as a sector they were raising £45m (84 charities) and £48m (97 charities) respectively.  In 2009 there were just 31 brain tumour charities raising £3m between them.

Together with other larger cancer charities and Government funders who were partners of the National Cancer Research Institute (NCRI); the national annual research spend on breast cancer and leukaemia at that time was £45m and £30m respectively, whilst for brain tumours the investment was just £4m.

For both of these cancers there have been significant advances in treatments as a result.  Today five-year survival is 87% for breast cancer and 52% for leukaemia, compared to 19% for brain tumour patients.

We recognised that in the 20 years prior to our launch and despite the emergence of brain tumour charities, progress had been slow and we needed to work together to change this, so we came together and launched Brain Tumour Research, with representatives of member charities as trustees.

To achieve significant progress we identified that Increased investment in research needed to come from three areas:

We are delighted that progress is being made on all fronts!

The Task and Finish Group established by the Department of Health has now completed its meetings and we eagerly await the report’s publication, scheduled for Autumn 2017.  This working Group was established as a direct result of your support for the e-petition launched by Maria Lester, who lost her brother Stephen Realf to a brain tumour. Over 120,000 of you signed this petition which led to the Parliamentary debate on research funding for brain tumours.  Your support also galvanised an unprecedented 70+ MPs to attend this debate, which led to the establishment of the group.

I have been proud to represent you all alongside Peter Realf, Maria’s father, as the Group discussed the opportunities for research into brain tumours, barriers which currently exist to achieving these and the areas that deserve particular focus. Momentum is gathering with members of the Working Group already announcing new initiatives to improve outcomes for brain tumour patients and their families, including Cancer Research UK’s recent announcement that they will be funding £25m over the next five years, including adopting a Centre of Excellence model.

Our own growth has been phenomenal and that is thanks to you our loyal supporters who have helped us raise awareness by sharing your stories, signing e-petitions, lobbying your MPs and fundraising to support our vital work. Whether you have organised a coffee morning, Do Lunch or Wear A Hat Day event, whether you have climbed mountains, jumped out of a plane, ran, cycled, walked and swam miles, displayed your collection boxes, bought Christmas Cards and merchandise or simply donated – you are making a difference and we won’t be able to find a cure without you.

In just eight years from a standing start of £zero, in 2009, our income has grown organically to nearly £4m a year. With your help, we intend to more than double that over the next three years!

Our investment in growth, campaigning and raising awareness is paying off.  With your help, and the help of our member charities, we have been able to establish and sustainably fund four thriving and productive centres of excellence. Each of these centres are able to attract more funding as a result of our support and over the next two years we will see their research being translated into clinical trials, taking us closer to finding a cure.

We are also proud to be funding the only brain tumour tissue network in the UK.  With 26 UK neuropathology centres involved, this gives effective coverage to 90% of samples available in the UK. Researchers can access this to help answer their research questions. This initiative was thanks to the instigation and planning of our member charity brainstrust as well as Charlie’s Challenge who helped us co-fund it in the early years. We are now working with the Southampton based centre to further develop this facility.

In 2017, we have already granted £2m which brings our total spend on research to over £7m in just 8 years and in that same time frame our member charities have contributed a further £3m.  Our dedication to research funding means that we can allocate a greater proportion of funds to brain tumour research than any other national charity.

Please help us reach our funding goal of £7m per annum to support seven centres.  Please keep on reaching out to your friends, family, colleagues and the organisations around you to also get involved.

The article originally appeared in the Autumn edition of our Believe magazine.