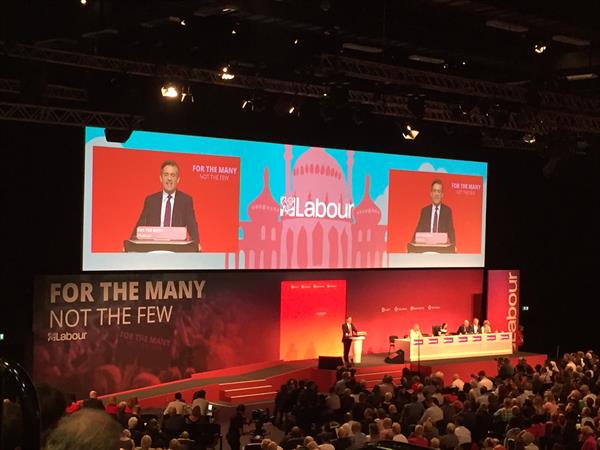 The heat wasn’t just down to the unusually balmy late-September weather, but largely a result of Labour’s sheer fervour emanating from a better than expected General Election result.

Below we review Labour Conference 2017, how the party’s policy proposals could affect the brain tumour community and how we engaged with Labour politicians and other stakeholders.

As the main opposition Party, Labour’s Annual Conference is well-attended by a variety of people and organisations. In addition to politicians, we were able to speak to, and share best practice with, our allies in other health charities, such as Arthritis Research UK, Prostate Cancer UK and Cancer Research UK, to name a few.

A packed Conference agenda also afforded us the opportunity to attend various fringe events, where policies were discussed in more detail. Some of the most relevant and interesting of these included an event about inequality in child health – despite killing more children than any other cancer brain tumours still receive just over 1% of the national cancer research spend.

Time and time again it was concluded that when an ‘all population’ approach is applied to an issue where children are generally affected the most, adults are usually the net beneficiaries. And so, policies and spend often need tailoring to the requirements of children, who are the tax payers and innovators of the future! It was also interesting to hear Alison Garnham, Chief Executive of the Child Poverty Action Group, say that, in terms of improving paediatric health, “whadd’ya know…money works!”. Similarly, the only way to improve outcomes for brain tumour patients and their families is to address the historic underfunding of research into brain tumours, through the Government, larger cancer charities and the support of the general public & organisations.

Other fringe events of interest included a discussion on what the public would like to see from Brexit. We made the point that it would be vital for any area of medical research, not just brain tumours, that highly-educated medical researchers can continue their work in the UK post-Brexit. Finding a cure is a multinational endeavour.

With our Brain Tumour Pledge board in tow, we had meetings with both old and new friends in the Labour Party.

One such encounter was with the Rt. Hon George Howarth – who first became linked with Brain Tumour Research earlier this year when he signed our Brain Tumour Pledge. We briefed George about the Government’s Task & Finish Working Group on brain tumours, brain cancer incidence within his constituency (Knowsley), and how we could work together in the future.

Another useful meeting was with one of our oldest supporters, Kevin Brennan MP (Cardiff West) – who is a Vice-Chair of the All-Party Parliamentary Group on Brain Tumours (APPGBT). We spoke to Kevin about how brain tumour patient data is collected in Wales and chatted through how best we could utilise the APPGBT to influence cancer policy at the highest levels as we campaign to increase national investment for research into this devastating disease.

Next week will see Carrie and Hugh Adams, our Head of PR & Media, attend Conservative Party Conference in Manchester.

Check back here for more updates and if you have any questions or would like to get involved in our campaigning, please do not hesitate to contact us at campaigning@braintumourresearch.org