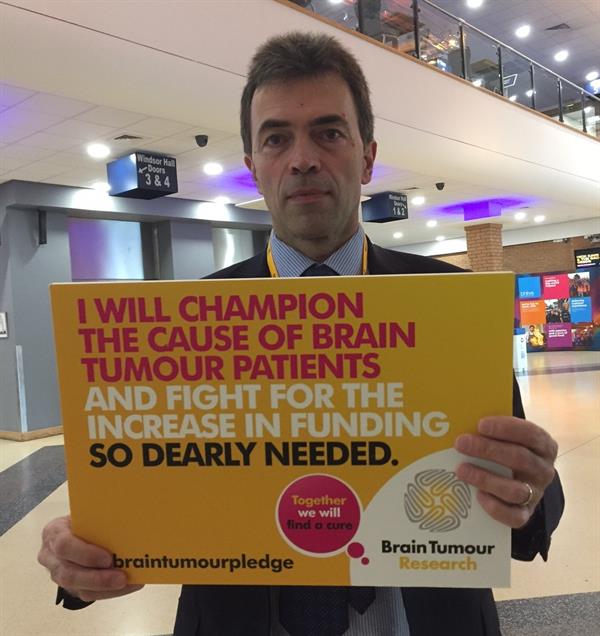 26 September 2017 by Greg Judge
The middle of September signals the start of the annual Party Conference season. Over the next four weeks, political parties big and small will be meeting up and down the country to discuss the issues that matter to them and tell voters at home about their latest policies.

Our Public Affairs team are covering all the major party conferences this year. We are reminding political figures that brain tumour patients and the researchers who are working hard to find a cure, are still being faced with significant and chronic underfunding. Crucially, this means that a cure currently remains in the distance, which is both a human and political crisis.

Last week, Brain Tumour Research’s Head of Public Affairs and Campaigning, Carrie Hume and Public Affairs Officer, Greg Judge joined the Liberal Democrats in Bournemouth for a few days as they hosted their autumn conference. This is a year in which the party increased its number of MPs and elected a new leader in Vince Cable. Here we overview this event and how we engaged the Lib Dem party on behalf of the brain tumour community to address the historic underfunding of brain tumour research.

Conferences are a good opportunity to update politicians on the issues that matter to our brain tumour community. Carrie and Greg met with Tom Brake, MP for Carshalton and Wallington. Tom tabled a House of Commons Early Day Motion (EDM) for MPs in 2016 on brain tumour research after being approached by a constituent who had a brain tumour. Now a key supporter of increasing research funding, Tom is a great example of how patients and families can grow our support for change inside Parliament.

Following the success of our Brain Tumour Pledge campaign during the General Election (and a big thank you to 200+ candidates who pledged their support), we created a pledge board to take to the conferences. Every politician we talked to was happy to have a picture taken with our pledge board and declare that they would fight for an increase in funding.

Next we met Alistair Carmichael MP, our new Officer on the APPG on Brain Tumours. We discussed at some length the upcoming Task and Finish Working Group report, which he is very interested in to ensure genuinely moves us forward. He agreed with our team that the report will set down the direction of travel for the brain tumour research sector for years to come. We will work with him and other MPs to make the report a success.

The outcome of the General Election now means that the House of Lords, Parliament’s second chamber has become more important. Baroness Walmsley, the Liberal Democrat Health Spokesperson in the Lords shared with us her insights into the NHS and life sciences sector. She kindly signed our pledge and we look forward to working with her and other peers going forward.

As well as meeting with Norman Lamb MP, former Health Minister and newly elected Chair of the Science and Technology Select Committee, Carrie and Greg also met with parliamentary hopefuls who support our cause. These activists could be the politicians of the future.

The main purpose of a party conference is for politicians and activists to present new policy proposals to audiences in the auditorium. In between these sessions, delegates attend smaller meetings in the conference centre and nearby hotels. Carrie and Greg followed the key developments that matter to brain tumour research.

Sunday night we attended a fringe meeting on the ‘state of data in 2017’ which looked at the issues of data protection, ownership and informed consent. This has become a big issue for those concerned about data privacy. Brain Tumour Research has been working with others over the past year to help agree on the best processes for collecting patient data and informing patients of how they can opt-in. Data, be it patient records, genetic information or even tumour tissue samples are fundamental to the work of our researchers and we will continue to engage with patients, politicians and policy experts into widening scientific access to these resources.

The following evening, Greg heard pharmacists and representatives of the National Pharmacy Association (NPA) debate the future of community pharmacy. The idea of utilising the skills of our local pharmacies could prove invaluable to brain tumour patients. Given the right training and assessment protocols, a pharmacist could potentially provide another referral route to concerned patients with suspected brain tumour symptoms. The NPC explained how greater reliance on their services can increase NHS efficiencies and community health advice.

Tuesday morning saw Norman Lamb MP take to the stage to tell conference about the big health challenges being faced by the public and politicians. He explained the pressures being faced by medical teams in hospitals across the country. Some of these pressures were recently covered on BBC Two’s Hospital documentary that followed neurosurgeons at a London hospital and included an interview with our research centre lead Kevin O’Neil.

Norman also discussed access to treatments, a theme picked up by a policy debate on the UK’s membership of the European Atomic Energy Community. There is still a lot of uncertainty about our access to medical isotopes, used in cancer diagnosis and treatments. These isotopes are regulated at a European-level and made only in other countries such as the Netherlands and France.

Tuesday afternoon saw Vince Cable address his party’s conference for the first time as Leader. He made references to the importance of an industrial strategy that provides a clear framework for science and innovation, and how one of Britain’s strengths is our world class universities, several of which house Brain Tumour Research’s Centres of Excellence.

This week will see Carrie and Nick Perkins, our Campaigns Officer attend Labour conference. Check back here for more updates and if you have any questions or would like to get involved in our campaigning, please do not hesitate to contact us at campaigning@braintumourresearch.org.