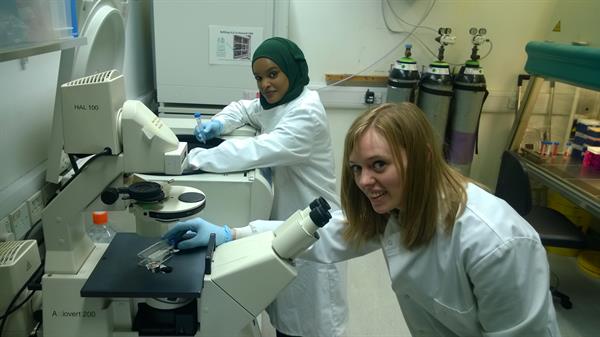 13 June 2017 by Crispin Zeeman
In an ambitious project, Brain Tumour Research’s Centre of Excellence at Queen Mary University of London (QMUL) is currently tackling the issue of patient-specific therapies.

This project relies on living cells that can only be obtained from patients during brain tumour surgery. An important aspect of this project is the pairing of cancer cells with normal cells from the same patient. Over the last few years, the team at QMUL has developed a method to achieve this. This study is very costly and it is essential that the right tissue is used in the research project.

The team at QMUL works in close partnership with Neuropathologist Prof Sebastian Brandner at University College of London (UCL) and Dr Jeremy Rees, a Consultant Neurologist at the adjacent The National Hospital for Neurology and Neurosurgery (NHNN). They identify and approach suitable patients for the study and ask them whether they would be willing to take part. Already during a patient’s operation, Sebastian and his colleagues make a preliminary diagnosis by looking at the tissue sample under a microscope; more detailed information confirming the type of brain tumour being available usually in two days. Further detail is required to be certain that the right subgroup of high-grade gliomas, i.e. the glioblastoma multiforme (GBM), is evident in the culture. This confirmation comes approximately one to two weeks later using DNA-based molecular tests, which further subclassifies the GBM.

Highly specialised, in-depth scientific data about the individual subtypes of GBM are needed to understand its biological behaviour. To achieve this, the researchers in Prof Brandner’s laboratory use a method to get the most detailed and accurate information about each individual tumour subtype. They conduct a complex analysis of the DNA from the tumour, examining hundreds of thousands of “points” in the genome, which may be changed by an event called methylation. These data are then fed into a supercomputer, which compares them against a large database containing existing information on brain tumours and informs us to which GBM molecular subgroup the tumour belongs.

This technology, which is an important and novel addition to precision diagnostics in neuropathology, is available only at a few institutions in the UK, including the NHNN.
This article originally appeared in Believe - Issue 009 - Summer 2017.