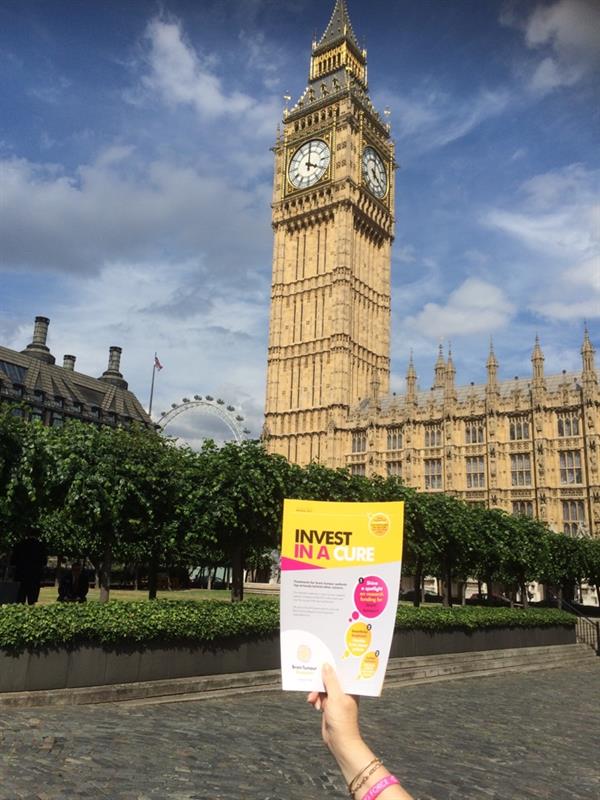 The third meeting of the Department of Health Task and Finish working group on the investment into brain tumour research took place on the 17th May. This was attended by our Chief Executive Sue Farrington Smith MBE and our Director of Research Dr Kieran Breen.

This group was established in 2016 as a direct result of the Parliamentary debate on research funding for brain tumours which was attended by over 70 MPs. This followed the fantastic e-petition, established by Maria Lester who lost her brother Stephen to a brain tumour. This was supported by Brain Tumour Research and received over 120,000 signatures (find out more here). A House of Commons Petitions Committee report also identified a stark underinvestment in brain tumour research.

The first two meetings of the working group discussed the opportunities that existed for research into brain tumours and the barriers which currently exist to achieving these. The purpose of Wednesday’s meeting was to identify the areas on which we should focus and which will make a real difference for people living with brain tumours and their families.

Brain Tumour Research has identified three key areas which we consider to be pivotal in our search for a cure.

In order to develop new therapies for brain tumours, we need to understand the changes that occur when nerve cells change to form tumour cells, and the best way to do this is to use samples of tumours removed following surgery. In association with the brainstrust and Charlie’s Challenge charities, Brain Tumour Research has funded the BRAIN UK programme at the University of Southampton (find out more here). This co-ordinates the distribution to researchers of over 400,000 tumour tissue samples from 26 tissue banks throughout the UK and acts as a single “one stop shop” to which researchers can apply for tissue samples.

The development of new drugs is a very expensive process and a number of negative results from promising agents have been announced recently. Therefore, we have identified drug repositioning as a key area for research. This involves the use of agents which are currently used to treat other conditions but which appear to have the ability to kill tumour cells. We highlighted this topic at the meeting and it was widely accepted by our clinical colleagues that this is a key research area for the development of new and more effective therapies. This will be combined with research into other therapeutic areas, such as surgery and radiotherapy, to ensure that there is a combined approach for the development of new treatments.

The third area which we have highlighted is the training of the next generation of researchers or capacity building. We have been facilitating this through the establishment of research Centres of Excellence (find out more here). These facilitate the training of promising new researchers and provide them with the opportunity to carry out research that will act as a foundation for their future careers. While one major research funding charity suggested that the best way to increase capacity in brain tumour research was to attract new researchers from abroad, the overwhelming consensus of the group agreed with our strategy that we have significant research talent – both scientists and clinicians – in the UK already and we need to increase funding in order to develop mechanisms by which new talent can be developed. Our Centre of Excellence model is a key way in which we can achieve this.

So the Charity’s three main objectives have also been identified as being key areas for development by the members of the Task and Finish Working Group.

But we can’t be complacent. We need to ensure that the recommendations are acted upon and we will continue our campaign to ensure that there will be a much greater investment into the key areas of brain tumour research which will make a real difference for people living with brain tumours and their families.