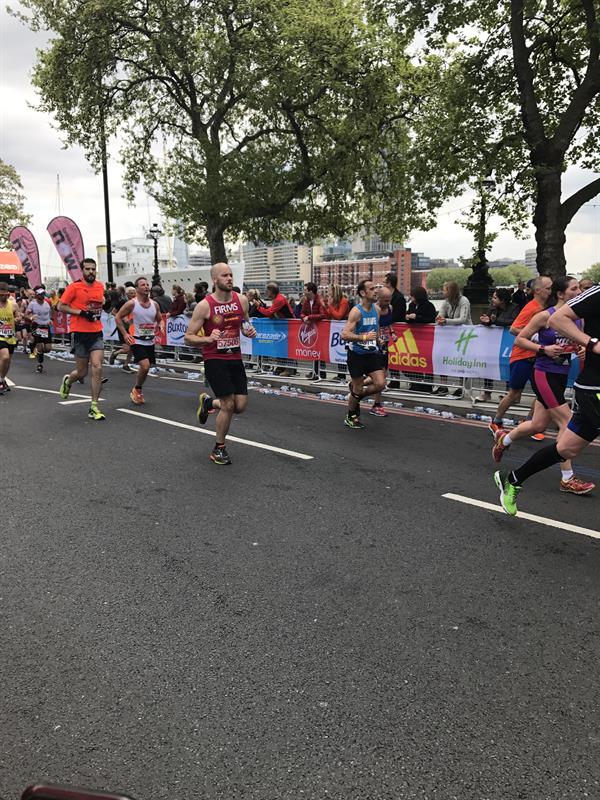 One of our fantastic 2017 London Marathon runners, Luke, shares his top tips and experience for those of you hoping to run in the 2018 Marathon.

Luke became a father of two only four days before he ran the London Marathon. He ran in memory of his dad, Derek “Delboy”.

What would you tell yourself if you were to do it all again?

Double check where the Brain Tumour Research cheer station is before starting (in the fog of exhaustion I’d completely forgotten so didn’t even wave to the cheer squad!).

Don’t get fixated on keeping pace with the man who was dressed like the Pope, (who was a faster runner).

Smile at the BBC camera on the start line.

What would you do differently?

Eat a little more for breakfast and drink more Lucozade on the way round, I was a bit dehydrated at the end as had stuck mostly to small sips of water.

Don’t rely on the Met Office forecast (I didn’t bring a hat, thank God my moisturiser has sun factor in it, doubles as a “hair” product when you’re bald).

Space my gels [Energy gels are concentrated energy drinks] out a bit better, I probably had too many.

How did it make you feel?

I absolutely loved every bit of it until mile 18, then gradually the legs became heavier until 21, when it became a bit of a struggle (wasn’t expecting it to happen so quickly) and every mile felt like two.

What went through your mind as you crossed the finish line?

I thought of so many things at once: seeing my wife, my two and a half year old son and my four day old daughter; my Dad, who she will never meet – he died from a grade four Brain Tumour, my main reason for running for Brain Tumour Research; the difference the funds I’ve helped raise will make; the beer I was really looking forward to but now felt too sick to drink; why that bloke at mile three got bored talking to me; that I’d like to do it again despite the struggle at the end.