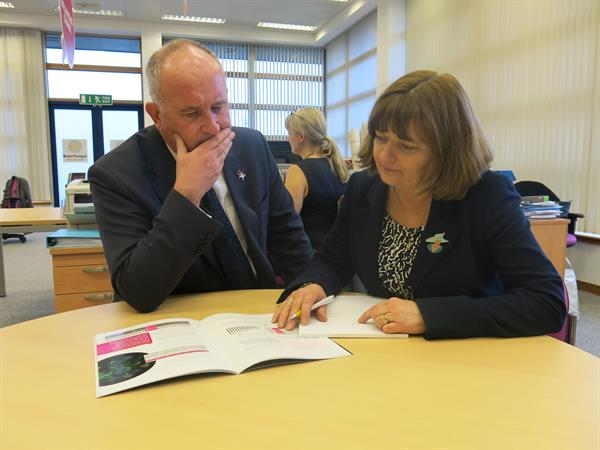 Today our Chief Executive Sue Farrington Smith is at Buckingham Palace for an investiture ceremony at which she will receive her MBE for services to brain tumour research and awareness raising.

On October 1st 2010 I joined Sue at Brain Tumour Research as the first full time employee. Back then we were based on her farm in the Buckinghamshire countryside. I hadn’t worked for a charity before but Sue’s energy, vision and ambition pulled me along as we established our first dedicated research centre at the University of Portsmouth. Using statistical analysis Sue had discovered that brain tumours are the biggest cancer killer of children and adults under the age of 40 yet research funding levels were woefully low. Armed with this type of information we talked to anyone who would listen encouraging them to lobby their MP’s, to get their stories in the media, to support Wear A Hat Day and to help us fund the fight against brain tumours.

Six and a half years later Brain Tumour Research has raised over £10 million, we have taken our message to national media, we have engaged with high profile celebrities and are just embarking on a game changing Wear A Hat Day partnership with Hobbycraft. We have galvanised our community to support an e-petition, achieving 120K signatories and resulting in the current Department of Health working group looking into the historic underfunding of research

Sue has pushed, dragged, carried and led the team at Brain Tumour Research as we have grown and grown and we are now hugely experienced, talented and driven team operating from modern offices in the heart of Milton Keynes.

I remember the early days of Brain Tumour Research when it was all hands-on deck counting out pin badges, assembling collection boxes and Sue always available on her mobile to anyone who needed to chat meaning she was frequently dealing with her mountain of emails until the early hours of the morning before getting up to get the kids to school and then coming into the office.

Some things haven’t changed! Sue is still the same, as passionate about making a difference as ever and working around the clock to support the brain tumour community. The only difference is that she is now Sue Farrington Smith MBE and I am proud to have stood alongside her as we continue to get closer to a cure.

On this special day please join me in wishing Sue a wonderful but poignant day and as many of you will have your personal memories of standing alongside Sue in our fight then please do feel free to share them below.