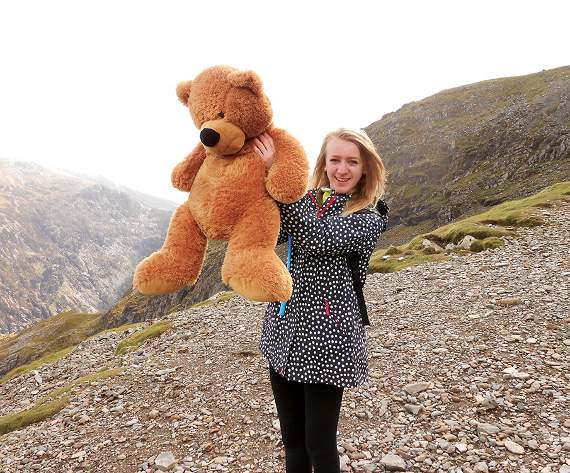 Emma Welch climbed Mount Snowdon last year with 135 teddy bears, setting a Guinness World Record just days before an operation to correct her scoliosis. Sadly, she passed away from complications, hours after the surgery, aged just 14.

Emma was a magnificent fundraiser of ours. Ever since she learnt that her former church minister had been diagnosed with an aggressive brain tumour, Emma inspired more than £13,000 in donations.

Now, her friends have been motivated to attempt two Guinness World Records on the first anniversary of her death.

On Saturday 4th June 2016, two crochet world records will be attempted at The Forum in Bath. The first challenge will be an attempt to break the current record of 485 people crocheting simultaneously and the second will be to produce the largest display of crocheted items.

Norton Hill School student, Victoria Roberts, 15, said: “Since the sad death of my dear friend Emma Daisy Welch, I have taken it upon myself to continue her mantel as a fundraiser for Brain Tumour Research. Emma was passionate about raising funds for research into the biggest cancer killer of children and adults under the age of 40. Having learned that Andrew Stammers, the Minister at Radstock Baptist Church, had been diagnosed with a brain tumour, she was shocked that just 1% of the national spend on cancer research has been allocated to this devastating disease. And this led to her decision to take on some incredible challenges to raise desperately needed funds for research into brain tumours despite being in pain herself with scoliosis (a curvature of the spine).

“Our family too have been touched by this awful form of cancer. My aunt, Sharon Wootten, died aged 45, having been diagnosed with a brain tumour when she was 39, leaving my teenage cousins without a mum.”

They are also trying to crochet more than 13,000 daisies (which will be sold on the anniversary of losing Emma), but they need more people to help them.

Carol Robertson, Our Head of Community Fundraising commented: “It is wonderful that Victoria and Daisy Bear are continuing Emma’s incredible legacy. Now we just need people to be inspired to help make these challenges become record-breakers.

For more information and to volunteer, go to: www.facebook.com/daisy.bear.750