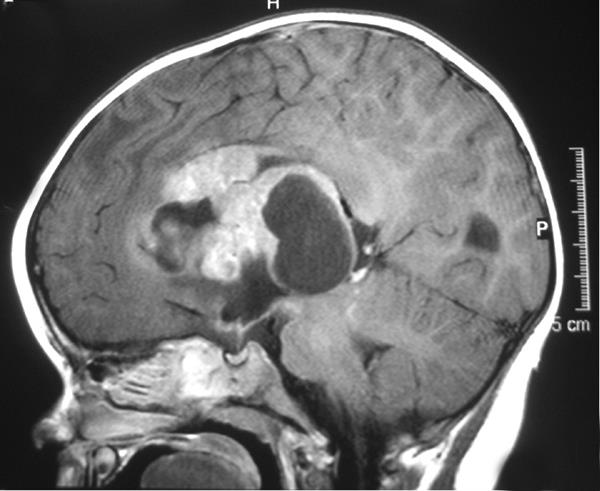 An article appeared online this week entitled “Scientists find three subgroups in a children’s brain cancer, identify druggable targets”. It suggests that new drugs may shortly be available for a specific type of brain tumour. Sounds like great news… but is this really the case? Our Director of Research, Dr Kieran Breen, probes the reality behind the headlines.

What was the aim of this study?

The study was carried out to improve understanding of a specific type of brain tumour – Atypical teratoid rhabdoid tumour (AT/RT). This is a very rare but fast-growing tumour, typically diagnosed in childhood. It can occur anywhere in the brain or the spinal cord and the symptoms vary according to its location, making it difficult to diagnose.

The tumour can be associated with mutations in a specific gene and these changes can occur spontaneously or be inherited. The researchers wanted to obtain further information about the genes associated with AT/RT and how this information can help in the development of new therapies.

What has this study found?

The researchers used tissue samples taken from children with the tumour to assess the genetic makeup of the cells. By correlating this with the location of the tumours within the brain, different sub-groups of tumour type can be identified.

For example, tumours which are found within the spine have a very different ‘genetic footprint’ to those in other parts of the brain. A study of these footprints has identified three main sub-types of tumour. However, such detailed information can only be obtained by using post-mortem tissue.

This is why we are providing funding and support for BRAIN UK, the world’s first ‘virtual’ national brain bank, based at the University of Southampton and linking 26 surgical centres around the UK. Between them, over 400,000 tissue samples are now available for researchers, offering wide-ranging opportunities to further scientists’ understanding of many different types of brain tumour.

What does this mean for treatment?

In the immediate future, this sadly won’t improve the treatment options for people with AT/RT. However, a greater understanding of the genetic changes associated with the tumour sub-types means that over time, researchers may be able to identify drugs which will target these cells and stop them developing or even kill them.

The development of new drugs is extremely expensive – it has been estimated at £1.2billion. So we need to take another approach. If we understand what changes occur, we can then assess whether there are existing drugs which may be able to act on these targets. This is referred to as drug repurposing – using drugs originally designed to treat one disease to target another.

Scientists at our Centre of Excellence in the University of Portsmouth are conducting vital research into drug repurposing.

In addition, the team in our Research Centre of Excellence at Plymouth University are working to understand changes that occur in certain types of tumour cells. Their discoveries may ultimately help us to identify new drugs to more effectively treat brain tumours.

So while stories such as this one may give rise to false hope, the research underneath is helping improve our understanding of the changes associated with the formation of brain tumours, bringing us closer to achieving our vision of finding a cure for brain tumours. But in order to achieve this vision, we need much more investment in research.

Thanks to the success of a Parliamentary e-petition submitted earlier this year, we are now working with the Department of Health in a new Task and Finish Working Group to assess the underfunding of research into brain tumours and to hold the Government to account on its commitment to address this issue.

Another Parliamentary e-petition has been set up by Kim and Richie Bennett, who lost their 2-year-old daughter Rhiley to an AT/RT brain tumour in 2014. We urge you to please sign this petition and ask everyone you know to do the same. Help us raise awareness of this type of brain tumour and the need for increased investment into brain tumour research.

You can read more about Rhiley Bennett and AT/RT tumours here.