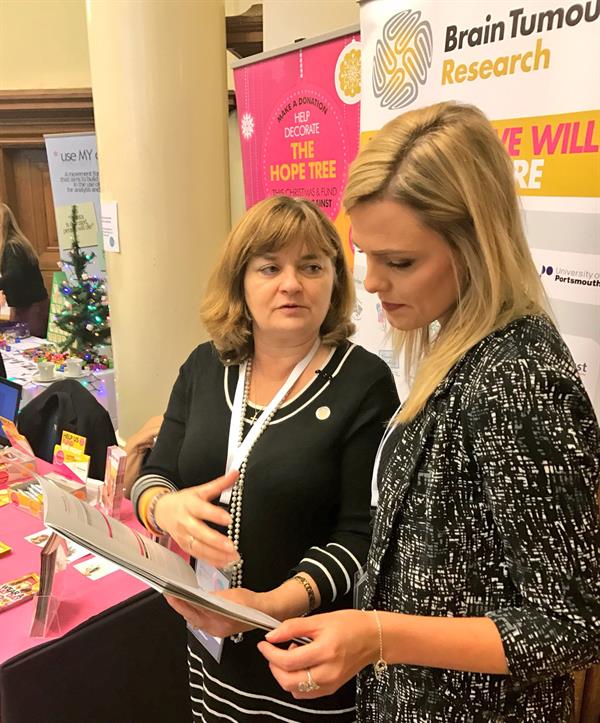 Ensuring our campaigning voice is heard is a vital part of all that we do at Brain Tumour Research and that’s why our Chief Executive, Sue Farrington Smith, and the Chair of our Trustees, Wendy Fulcher. attended the Britain Against Cancer conference in Westminster.

This annual event is hosted by the All Party Parliamentary Group on Cancer and was attended by more than 450 people. Key decision makers in Government and the NHS rubbed shoulders with patients, policy experts, carers, commercial organisations and other charities. Members of our external affairs and marketing teams had a busy day briefing delegates on the work we are doing to achieve our vision of finding a cure for brain tumours.

Among those addressing the conference were John Barron MP, Chair of the APPG on Cancer, and Simon Stevens, Chief Executive NHS England. Subjects addressed ranged from rarer cancers to secondary cancers, from prevention to early diagnosis and from the use of patient data to the rising cost of cancer care in an ageing population. Simon Stevens shared positive news about improving cancer survival rates and prevention but recognised still more needs to be done.

A measure of the significance of the event was that during the day #britainagainstcancer was trending on Twitter.

It was also a chance to catch up with old friends and meet new connections. Our team discussed matters of shared interest with team members from other charities including Bloodwise, Leukaemia Care, Breast Cancer Care and Macmillan.

Interest in our Report on National Research Funding was high and Britain Against Cancer was an opportunity for those who co-authored and researched it to answer questions on its findings regarding historic underfunding.

Also present was Dr Helen Campbell from the Department of Health who provides the secretariat for the Task & Finish working group into brain tumours. We look forward to working with her in the run up to the second meeting of the group on January 30th and to her speaking to the APPG on the 14th December. Dr Campbell was impressed that so much has happened in the policy world of brain tumour research since we met her at last year’s conference.

Influencing change is a key value of our organisation and Britain Against Cancer is an example of how we can use our authority and expertise to positively influence wider public understanding of this disease, focusing minds on the required funding to fight it. We are committed to continue leading the national debate on improving outcomes for brain tumour patients.