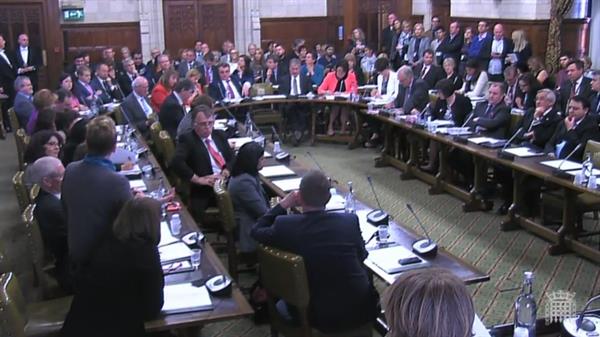 The Government has released its official response to the House of Commons Petitions Committee’s first ever report into funding for research into brain tumours.

This follows the landmark debate in Westminster Hall on the 18th April that over 70 MPs attended and which attracted the support of many more parliamentarians. The Minister for Life Sciences George Freeman MP represented the Government on the day.

Responding to the Committee’s recommendations, the Government conceded that a “greater level of brain tumour research is urgently needed so that patients can experience better outcomes.”

Following the debate, George announced that the Government will convene a working group of clinicians, charities and officials to determine how best research funding partners can work together to deliver the further research needed.

The Petitions Committee has said it will be keeping a close eye on the progress of the working group once it is established. Chair of the Petitions Committee, Helen Jones MP, concluded: “The Government has not yet accepted some of our important recommendations. The response often speaks about Government action on cancer in general, without recognising one of the central messages of our report: that the complexities of brain tumours mean that they do not always benefit from general cancer research.”

Helen paid special tribute to Maria Lester and the Realf family who started the
e-Petition in August 2015 which led to the committee’s report and subsequent debate.

She also recognised the tireless campaigning of Brain Tumour Research and the work we did to raise awareness amongst MPs.

When the working group assembles later this year, Brain Tumour Research expects to play a full part in the discussions with Government and their plans to help address the chronic underfunding of research into this devastating disease.

In their response, the Government acknowledged the vital role of charities in driving medical research and increasing the level of brain tumour research. George made a “comprehensive offer for the views of charities to be heard in the new landscape of life science research co-ordination”. He also recognised that increased investment in brain tumour research by charities helps to drive increased investment into research infrastructure by the National Institute for Health Research.

Brain Tumour Research is the only national charity in the UK that is dedicated to granting funds to continuous and sustainable scientific research into brain tumours.

We welcome the Government’s “commitment to working with patients, charities, the NHS, academia and industry to further develop and sustain a health research environment where brain tumour research can thrive and increase.” However, we share Helen’s view that “brain tumour patients and their families will be expecting real action, not just warm words” to come out of the Government’s new commitments.

In a previous commitment, George pledged to publish a national register that will consider how public funds are spent across different disease areas and different organs by therapeutic area. It is important that research spending from all organisations is captured in order to minimise duplication and increase awareness of the current state of brain tumour research. All medical research charities and research institutions will need to be consulted in this process.

A renewed commitment to implement a key recommendation of the 2015 Independent Cancer Taskforce Strategy into early diagnosis of cancers is also welcomed. By 2020, patients referred for testing by a GP – because of symptoms or doctor’s opinion – should either be definitively diagnosed with cancer or cancer excluded and this result should be communicated to the patient within four weeks.

The Government has also accepted the importance of supporting GPs to identify patients whose symptoms may indicate a brain tumour and urgently refer them. They have committed to continue working with Public Health England, NHS England and others to keep campaigns under review, to see what can be done to increase awareness of other cancers, including brain tumours.

Detecting brain tumours early enough is one aspect of finding a cure but with currently no available treatment or drugs, research into the basic science of brain tumours and novel treatments should be a key priority. There are over 120 types of brain tumour and each requires specific attention by specialist researchers which cannot be achieved without Government leadership.

Encouraging the Next Generation

The Petitions Committee recognised the “challenges faced by young research scientists who want to pursue a career in brain tumour research.” The Government has promised to make support more flexible for those wanting to pursue a research career in brain tumours as well as other fields. They have also stated that they are “helping to remove the financial barrier commonly faced by those looking to pursue doctoral study, including doctoral study related to brain tumours, by offering loans of up to £25,000.”

A commitment to supporting the next generation of researchers is crucial in developing cures for brain tumours. Currently, too many post-doctoral researchers find it difficult to secure funding in brain tumour research and are forced to move into different areas of research.

Chief Executive of Brain Tumour Research, Sue Farrington Smith, said: “Brain Tumour Research thanks the Petitions Committee for their commitment in highlighting this devastating disease to MPs and the public. For the Government to acknowledge the urgency of the funding crisis in brain tumour research is a significant step forward. We look forward to working with them and others in the future through partnership and open dialogue.

Brain tumours kill more children and adults under the age of 40 than any other cancer yet just 1% of the national spend on cancer research has been allocated to this devastating disease. This is unacceptable. At the current rate of spend it will take 100 years to find a cure.

I am reassured in the knowledge that the Petitions Committee will continue to monitor the progress of the Government’s commitments to achieve real action. Special thanks go to Maria Lester and the Realf family for starting the petition and to our many supporters throughout the UK who have galvanised signatures for this e-Petition and made our success possible.

Together we will find a cure.”