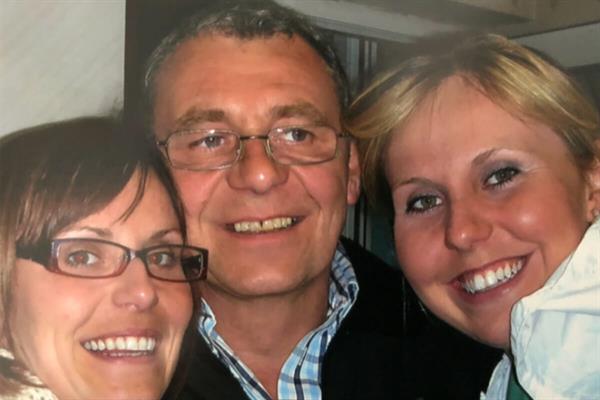 Supporters are attending an event at our Brain Tumour Research Centre of Excellence at Queen Mary University of London this afternoon (12th December).

They are being given the opportunity to tour the lab, where ground-breaking progress is being made, and meet the scientists driving progress to find new treatments and a cure for brain tumours.

Amongst those visiting the Centre is the family of Clive Smith, who died from a glioblastoma (GBM) in July 2009, aged 55.

The team at Queen Mary, led by Professor Silvia Marino, is undertaking pioneering research into GBM – the most common type of primary high-grade brain tumour in adults, and the deadliest. They have recently made a breakthrough which could help inform tailored treatment choices for patients with GBM.

As well as meeting the researchers, Clive’s daughters, Louise Smith and Amy Pearson (pictured with Clive), will place a tile on the Wall of Hope in memory of their beloved dad. It’s after they raised more than £3,000 from a charity ball at Scunthorpe United FC to mark the 10th anniversary of Clive’s death.

Amy said: “Before Dad was diagnosed, we’d never heard of anyone dying from a brain tumour. It was such a shock to lose him so quickly. Much more funding needs to go into research because treatments for brain tumour patients have barely changed for decades. We are doing our best to raise awareness and funds to make a difference.”

Read an update from the day on our blog later this week.