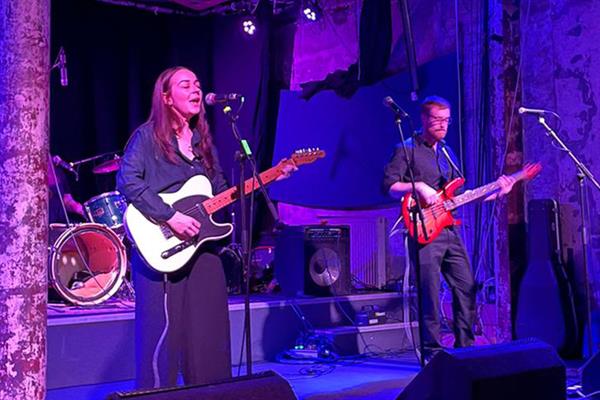 Music lovers, fans, friends and loved ones of Dale Barclay, known to many as frontman and lead singer of the Amazing Snakeheads, flocked to a gig in Glasgow last night to honour him  and mark his birthday.

Dale, the inspiration for our Fundraising Group the Dale Barclay Fund, was diagnosed with a glioblastoma (GBM) brain tumour in late 2017 after a series of seizures, vomiting and a severe headache. He underwent surgery, as well as the standard treatment of radiotherapy.

In July 2018 the tumour was found to have doubled in size, but Dale was refused further surgery on the NHS, so Dale and his wife Laura, also a musician, crowdfunded for a private craniotomy in Harley Street. The operation went well and Dale was discharged, but suffered a catastrophic seizure and passed away very shortly afterwards, aged 32.

Organising the gig to mark what would have been Dale’s 37th birthday, Laura performed along with three other bands who were all “dear friends” of Dale’s for many years. Each band included a cover of a song written by Dale.

Laura said: “Dale’s spirit was captured in the room last night. The bands performed their hearts out. I’m so grateful to all who came along to remember Dale and celebrate the music he left behind. We did him proud. And it looks like the gig has raised a further £1,000 for the Dale Barclay Fund!”

To buy a copy of Dale’s song Wild at Heart which Laura finished after his death and released with profits going to Brain Tumour Research, go to https://dalebarclay.bandcamp.com/releases