Bearded pals paddling for a cure 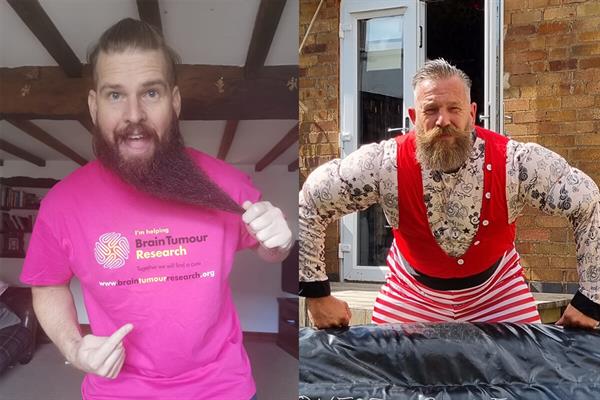 Two bearded buddies will dress as strongmen to canoe the waterways of Oxford to help find a cure for brain tumours.

Damian Rees and Jason Smith are preparing to paddle 20 miles in an inflatable canoe from Banbury to the Oxford Beard Festival on Friday 9th September.

It’s to raise funds for Brain Tumour Research after Jason’s mum, Marion Greenwood, died from the disease in November 2021.

Marion was diagnosed with a glioblastoma (GBM) after her family noticed symptoms including slurred speech and the left side of her mouth drooping. A month after the tumour was discovered, she was rushed to hospital where tests revealed the tumour had grown and there were no treatment options.

Jason, whose beard won the award for ‘best natural four-inch beard’ in Scotland six years ago, is not the first in the family to support Brain Tumour Research. His sister Lisa Harrison raised more than £3,600 for the charity by taking on a walk in April.

He said: “I started to grow my beard after initially growing a moustache one year, my friend encouraged me to carry on and I haven’t looked back since.

“Mum kept saying that I should shave it off but after six months got used to seeing me with it and I think like many people, they wouldn’t be able to picture me without one. My plan was to shave it all off before Mum died, so she could see me without it one last time, however everything happened so quickly I never got the chance. I know she would be very proud of me and Lisa with our fundraising for sure.”