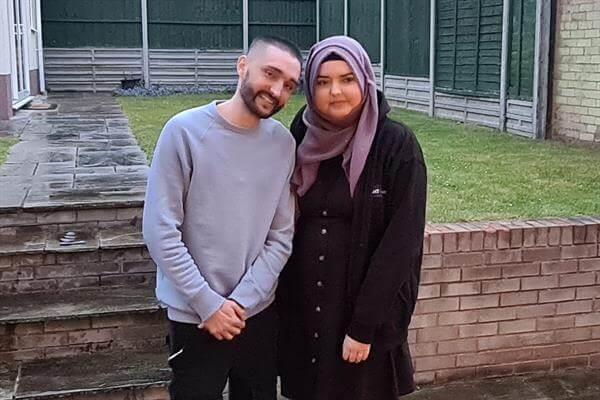 The Wanted’s Tom Parker has been posthumously shortlisted for a National Television Award for a documentary about the concert in aid of cancer charities he organised six months before his death from a brain tumour.

Tom, who campaigned with Brain Tumour Research for increased investment to find a cure, died in a hospital in south-east London on 30th March. He was 33.

The star-studded concert took place at the Royal Albert Hall last September and guests included our Head of Stakeholder Relations Hugh Adams and brain tumour patient Amani Liaquat (pictured with Tom) who died six weeks after him. Tom and Amani bonded over their glioblastoma diagnosis and recorded a podcast together.

The Channel 4 documentary Inside My Head captured him arranging the event alongside footage of him and his family learning to live with his illness.

The film was filmed, produced and directed by Dan Howell who told us: “We are proud of this recognition for a film that meant so much to all of us involved. Tom was a remarkable man and his story was shared with bravery, honesty and compassion. For me it gave a new insight into those diagnosed with this ruthless and devastating disease and I remain engaged with the brain tumour community. I sincerely hope that the film and Tom’s legacy will move us closer to improved outcomes for brain tumour patients.”

The awards will be hosted by comedian and presenter Joel Dommett in London on 15th September with the results announced live on TV.