Triathlon triumph will sponsor a day of research 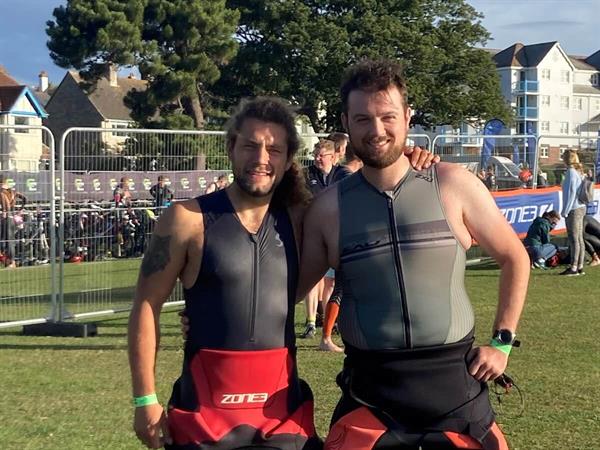 Two cousins have completed an Olympic distance triathlon to mark the 20th anniversary of the passing of a six-year-old boy who died of a brain tumour.

Ben Long and Gus Derry took part in the Swanage Triathlon on 3rd July. In what was Ben’s first triathlon and Gus’ fifth, they swam 1,500 metres, cycled 38km and ran 10km in aid of Brain Tumour Research.

Their inspiration was Ben’s brother Oscar, who died in November 2002, two weeks after being diagnosed with a diffuse intrinsic pontine glioma (DIPG). He was just six years old.

The pair raised more than £3,000, beating their target to sponsor a day of research at one of our Centres of Excellence.

Ben said: “I’m chuffed, I really am. Knowing the people we do and how they all come together for these things, I’m not surprised that we hit our target but I’m overjoyed with the fact we have. Everyone’s been so generous. I’m also excited about visiting a Centre and placing a tile and Gus is ecstatic about it because he’s never done it before.

“We want to prevent other families from having to suffer the way we did and by funding research we’re hopeful we’ll be able to help improve treatment options for future brain tumour patients.”

Gus added: “Oscar isn’t my only link to a brain tumour. My godbrother, Gary Oates, was diagnosed with one around the same time as him and has just had to undergo further treatment, learning to read, walk and talk again.”

You can still support Ben and Gus’ fundraising by donating via their JustGiving page: https://www.justgiving.com/fundraising/benjamin-long2