Trojans touchdown in game to find a cure 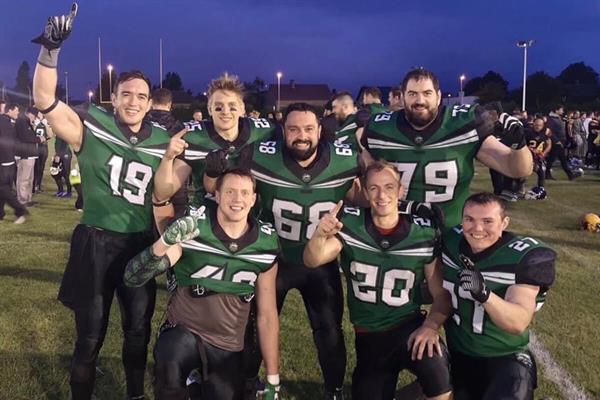 This weekend saw the American Football champions of Ireland host an emotional final home game of the season for their star player who had to give up the sport he loves after surviving a brain tumour.

The Belfast Trojans – the reigning champions of American Football Ireland’s Premier Division – have selected Brain Tumour Research as their charity of the year and are donating 10% of the tickets sales of all their home games to the charity.

Their support comes after Neil Graham (pictured front left) – considered to be one of the best line-backers in Irish American Football history – was diagnosed with an oligodendroglioma in September 2020. He underwent surgery to remove the tumour, followed by radiotherapy and chemotherapy.

Neil won five national championships with the Trojans and represented Ireland in three international games. Having had to retire from the sport he loves, he is now an assistant line-backer coach with the team.

He said: “The support from the team is absolutely amazing. Brain tumours are so poorly funded, and treatments have not changed for years.

“More needs to be done to improve peoples’ life expectancy and, ultimately, find a cure.”