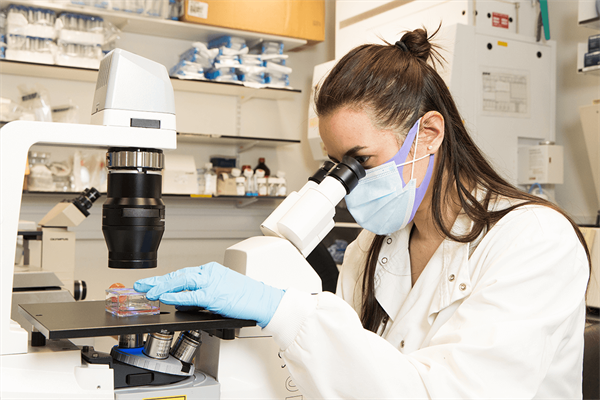 A new study has shown that loading the cancer drug palbociclib (Ibrance) in nanoparticles can boost its ability to fight medulloblastoma. The nanoparticle coating helps the drug reach tumours better and stay in the body longer, according to the researchers who led the study. As one of the study’s lead researchers said: “although standard medulloblastoma therapy is effective for most patients, it’s still not really satisfactory, with disabling toxicity and too many failures,” This pre-clinical study showed that palbociclib on its own didn’t shrink medulloblastoma tumours but with palbociclib loaded in nanoparticles survival rates were longer, although tumours eventually grew back. However, when nanoparticles containing both palbociclib and another drug, sapanisertib were used the results improved substantially compared to results when treatment was with either drug alone. Results of the study were published in  Science Advances.

Through studying the proteins controlling the formation of blood vessels during embryonic life, scientists at the ULB Neuroscience Institute, Belgium, believe they can identify glioblastoma targets with promising therapeutic potential. By developing molecules targeting the Gpr124/Reck membrane complex the research team have succeeded in slowing down tumour progression in pre-clinical models and reducing lesions following a stroke. This breakthrough was recently published in  Science.

Complete deletion of both the short arm of chromosome 1 (1p) and the long arm of chromosome 19 (19q), known as 1p/19q codeletion, is a mutation that can occur in gliomas. It occurs in a type of glioma known as oligodendroglioma and its higher-grade counterpart known as anaplastic oligodendroglioma. Detection of 1p/19q codeletion in gliomas is important because, together with another mutation in an enzyme known as isocitrate dehydrogenase, it is needed to make the diagnosis of an oligodendroglioma. Presence of 1p/19q codeletion also informs patient prognosis and prediction of the best drug treatment. The main two tests in use are fluorescent in situ hybridisation (FISH) and polymerase chain reaction (PCR)‐based loss of heterozygosity (LOH) assays (also known as PCR‐based short tandem repeat or microsatellite analysis). Many other tests are available. None of the tests is perfect, although PCR‐based LOH is expected to have very high sensitivity. This UK paper set out with the objectives of estimating the sensitivity and specificity and cost‐effectiveness of different deoxyribonucleic acid (DNA)‐based techniques for determining 1p/19q codeletion status in glioma.

Comparing cerebrospinal fluid samples from 40 patients with medulloblastoma and from 11 healthy children without the disease, investigators identified 110 genes, 10 types of RNA -- the machinery that translates proteins -- called circular RNAs, 14 lipids and several metabolites that were expressed differently between the two groups. While these details were not specific enough to distinguish among the four subtypes of medulloblastoma, they could be used to identify the presence of cancer versus normal fluid. A description of the work was published in Acta Neuropathologica Communications.

Yoram Palti, Novocure’s Founder and Chief Technology Officer, has been selected to receive the 2022 Israel Prize in the field of entrepreneurship and technological innovation. Professor Palti, a professor emeritus of physiology and biophysics at the Technion – Israel Institute of Technology, founded Novocure in 2000 based on a ground-breaking idea: that electric fields at very specific frequencies could be harnessed to treat cancer. He set up a laboratory in his basement and conducted experiments that would lead to his invention of Tumour Treating Fields (TTFields), electric fields that disrupt cancer cell division. Additional research followed, and in 2003, Novocure began its first clinical trial of TTFields in multiple solid tumor types. Today, TTFields therapy is approved in certain countries for the treatment of adults with glioblastoma or mesothelioma,

We don’t usually overlap this update with our campaigning work but I thought at the beginning of Brain Tumour Awareness you might be interested to read that a "Minister aims to put UK at forefront of brain tumour fight" and also that despite other news items being on the agenda there is still an appetite for brain tumour research news in the UK media, as the  Daily Mail, The National, Yahoo and other media covered the Brain Tumour Research Centre at Imperial’s news about the ADI-PEG20 paper (covered in this update a fortnight ago). Also that when it comes to raising awareness of the need for more research, celebrities like Jo Whiley and Debbie McGee are fully supportive for their own personal reasons.

Finally, this week on March 1st supporters, Brain Tumour Research team members and researchers came together for a minute's silence. We shared brain tumour stories, a poem and what we can do to help get closer to a cure. Our researchers also laid floral tributes at the foot of the Walls of Hope at our Research Centres of Excellence to remember all those lost to brain tumours. Wherever it was observed the brain tumour minute’s silence was, as every year, a poignant and reflective bonding experience.

That’s it for this week’s update, there won’t be an update next Friday but they will resume on Friday 18th March so until then wishing you all a peaceful time.