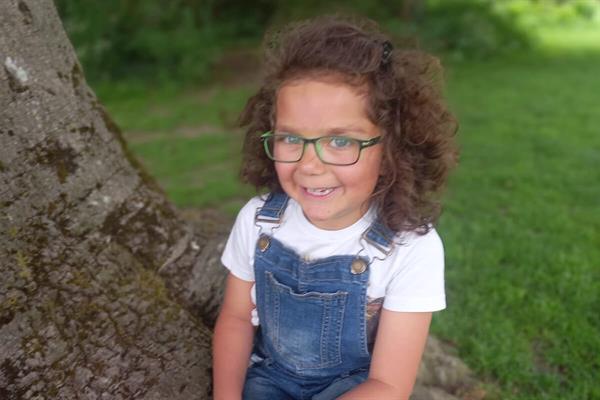 A brave seven-year-old and her family are fundraising to help improve outcomes for other children diagnosed with the disease.

Myah Bell (pictured) was just 10-and-a-half months old when she was diagnosed with a grade 2 choroid plexus papilloma (CPP) in February 2015. She had chemotherapy and underwent 19-hour brain surgery. Thankfully, after regular scans, Myah was given the all-clear and discharged in July last year, and now only attends an annual check-up to monitor her development.

Since Myah’s diagnosis, the family has taken part in different events to raise money and awareness for Brain Tumour Research, including Myah starring in our Wear A Hat Day campaign when she was four.

Her grandmother, Karen Bell, has introduced wellbeing craft workshops at work and has more than 40 people taking part in bauble decorating workshops throughout December. She is close to raising £2,740 to sponsor a day of research at one of our Centres of Excellence.

Big sister Freya, 10, has also joined in the fundraising with sponsored live Facebook ‘singing sessions’ alongside mum, Fay. They have raised more than £600 so far with plans to host an in-person karaoke party in the future.

Fay said: “We nearly lost Myah on four occasions. Every time she had a procedure we were warned of the risks, which included losing her sight, being permanently brain-damaged or even death. We feel so blessed to still have her in our lives and just want to do our bit to ensure others can survive this awful disease.”

If you’d like to support the family’s fundraising efforts, you can donate online here.