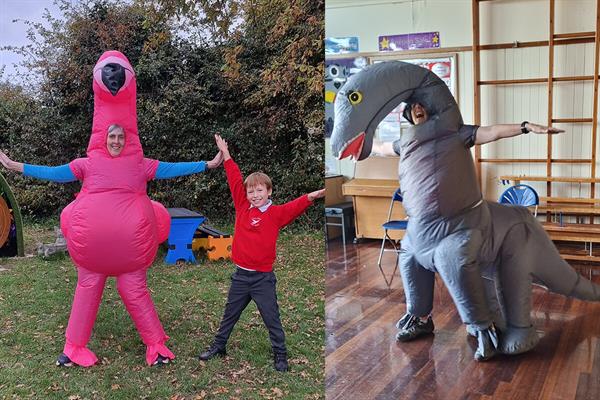 A teaching assistant is star jumping in fancy dress to raise funds for Brain Tumour Research after one of her pupils was diagnosed with the disease.

Penny Nash is on the final stretch of her 100 Star Jumps a Day in November Challenge. She has been completing her challenge wearing a variety of inflatable costumes, which so far have included a flamingo, giraffe, unicorn and various dinosaurs.

Penny’s costume-clad fundraising is inspired by her pupil, nine-year-old Shay Glenton (pictured with Penny). Shay began experiencing epileptic seizures when he was just 18 months old, which were linked to a condition called cortical dysplasia. The seizures were eventually managed with medication, until July 2018, when they began to worsen.

Shay underwent brain surgery during which his left temporal lobe was removed. Afterwards, his seizures reduced drastically, however a biopsy revealed that Shay had a grade 2 astrocytoma. He now has six-monthly scans to monitor the tumour for any regrowth, and he may require radiotherapy and chemotherapy treatment in the future.

Penny said: “Shay’s such a happy young man after everything he has been through. If putting on a silly costume and star jumping everyday can make a difference to the lives of people like Shay, then that’s the least I can do.”

You can watch Penny’s star jumping videos in costume and donate to support her efforts here.