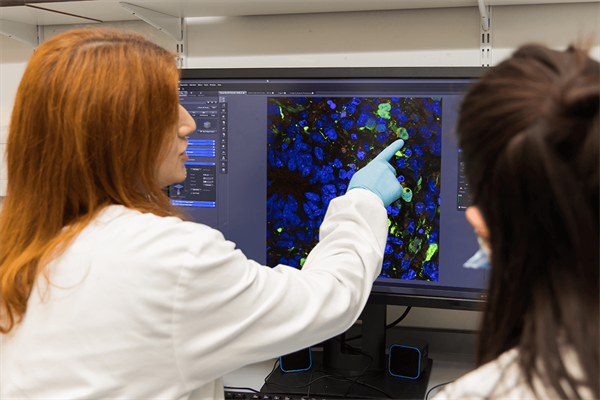 Results of early clinical trials suggest that Chimeric Antigen Receptor -T (CAR-T) cells can be adapted successfully to target brain tumours. A phase 1 analysis of one next-generation CAR T-cell therapy, reported at the AACR Virtual Special Conference on Brain Cancer, showed it may target and kill tumour cells while eliciting an immune system response. Making the transition from blood cancers to solid tumours, which has been challenging, is a focus of current research and this includes developing and optimizing CAR T cells to treat malignant brain tumours such as glioblastoma. Evidently, in the US at least, there are more CAR-T clinical trials currently open for the treatment of brain tumours than any other solid tumour.

Cellular immunotherapies that specifically target malignant tumours are thought to be a promising approach in cancer medicine. They identify target molecules that are found exclusively on the tumour cells and are recognized by the immune system. Gliomas lack suitable target structures and this is a considerable challenge for developing immunotherapies. However, using an experimental mouse model, researchers have now demonstrated for the first time that transgenic T cells targeting tumour neoepitopes can be used to treat gliomas. These results were published in the journal  Clinical Cancer Research.

Researchers have unveiled a new batch of prognostic cancer biomarkers encoded in the ‘dark matter of the cancer genome. By analysing long non-coding RNAs (lncRNAs), they revealed a catalogue of 166 prognostic biomarkers, which may have therapeutic significance. One biomarker within the catalogue has been shown to be highly effective in categorising gliomas as low- or high-risk.

The study is published in Cell Reports.

Since IDH mutant (mIDH) low-grade gliomas (LGGs) progress slowly and have a relatively long survival, there is a significant need for earlier measurements of clinical benefit. Guidance using the LGG RANO criteria recommends serial bidirectional (2D) measurements on a single slice; however, questions remain as to whether volumetric (3D) measurements are better, since they would allow for more accurate measurements in irregular shaped lesions and allow readers to better assess areas of subtle change. These questions are explored in a manuscript just published in Neuro Oncology.

Combination nivolumab plus ipilimumab was efficacious in patients with asymptomatic melanoma brain metastases (MBM) in the CheckMate 204 trial (an open-label, multicentre, phase 2 study) but showed low efficacy in patients with symptomatic MBM. Newly released, and funded by Bristol Myers Squibb, the 3-year follow-up data from the trial are published in the Lancet Oncology. This data is interpreted as finding that the durable 3-year response, overall survival, and progression-free survival rates for asymptomatic patients support first-line use of nivolumab plus ipilimumab. Symptomatic disease in patients with MBM remains difficult to treat, but some patients achieve a long-term response with the combination.

The EU-funded TargetGBM project has developed nanoparticles covered with a special coating to prevent them from entering other cells and with molecules that selectively target tumour cells. These nanoparticles can enter cells in the blood-brain barrier and so could potentially also cross it. If study results are validated this could lead to new brain tumour treatments.

Probably the two most common areas these weekly updates contain surround focused ultrasound and blood-based biopsies – this piece contains news on both areas plus a video!

In Brain Tumour Awareness Month (March) this year we reported on news of a research breakthrough from our Centre of Excellence at the University of Plymouth which could see a simple blood test reduce, or in some cases replace the need for intrusive surgery to help determine the best course of treatment for patients with meningioma.

The 2nd virtual seminar of the Finnish Brain Tumour Research Association (FiBTRA) is on 23rd November and will focus on brain cancer therapy delivery. Researchers presenting will include a great friend of Brain Tumour Research, Dr Laura Donovan, formerly of the research centre at the University of Portsmouth – (which we were proud to support for a decade), most latterly of the Hospital for Sick Kids in Toronto, and currently researching paediatric neuro-oncology at UCL Great Ormond Street Institute of Child Health.

Currently happening in Boston US is the annual SNO meeting with Novocure being very active as they deliver 31 presentations on Tumour Treating Fields including reporting on positive top-line phase 2 trial results in newly diagnosed Glioblastoma.

Next year’s British Neuro Oncology Society (BNOS) annual meeting will be in Liverpool. Hope to see you there and Brain Tumour Research will once again co-sponsor the Young Investigator Award.