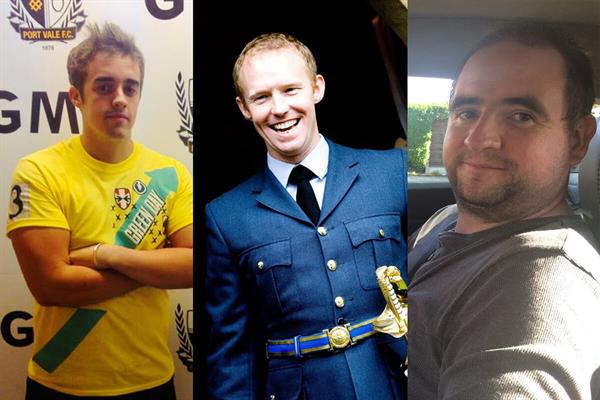 Today, we are remembering three men who lost their lives to brain tumours and inspired their loved ones to set up Fundraising Groups in their memory to help find a cure for this devastating disease.

Josh Brown should have been celebrating his 32nd birthday today. Josh died in March 2019, having been diagnosed with a pilocytic astrocytoma four years earlier. His sister Kimberlei launched the Fighting for a Cure Fundraising Group and has been undertaking a variety of activities to mark Josh’s birthday, including a 10k run and wrestling match. She hopes to raise enough to sponsor a day of research at one of our Centres of Excellence in Josh’s memory.

Having lost her husband, Wing Commander Kieran O’Sullivan, Beth Wright has marked the third anniversary by holding her second Boogie at the Biscuit event. Kieran was first diagnosed with a grade 2 astrocytoma in 2001 and underwent multiple surgeries, as well as radiotherapy and chemotherapy. Kieran died at the age of 44, almost 17 years after he was first diagnosed with a brain tumour.

The family of Andrew Bath are marking the fourth anniversary of his loss. Andrew was diagnosed with a glioblastoma multiforme (GBM) in 2017 and underwent surgery, as well as radiotherapy and chemotherapy. Tragically, he passed away just 10 months later, aged 37. His family set up Andy B and has raised more than £4,000 so far.

Andrew’s mum Lynn said: “We hope that by supporting Brain Tumour Research we can help raise awareness and help to bring about new and more effective treatments.”

We thank Josh, Kieran and Andrew’s loved ones for their commitment and support of our cause. We are thinking of them on this difficult day.