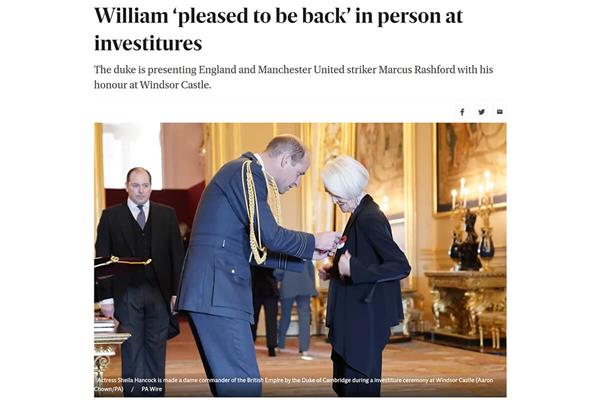 Our celebrity supporter Sheila Hancock, who was made a Dame Commander (DBE) for services to drama and charity in the New Year’s Honours list, has received the prestigious honour from the Duke of Cambridge.

Writing on Twitter, the Duke said he was “pleased to be back doing investitures in person, celebrating people across the UK who have gone above and beyond for their country and community.”

Sheila has been a friend of Brain Tumour Research since the charity launched in 2009. Her grandson Jack was diagnosed with a brain tumour at the age of four in May 1999. His nurse at Great Ormond Street Hospital also nursed Alison Phelan, the niece of our Chief Executive Sue Farrington Smith MBE, and Sheila became a Patron of Ali’s Dream, a founding Member Charity, set up in Ali’s memory in 2001.

Sheila helped us launched our first Centre of Excellence at the University of Portsmouth in 2010, and has attended our annual Speaker’s House events, supported Wear A Hat Day and our campaigning, and raised awareness in the media.

Our congratulations go to Sheila on this very well-deserved honour.