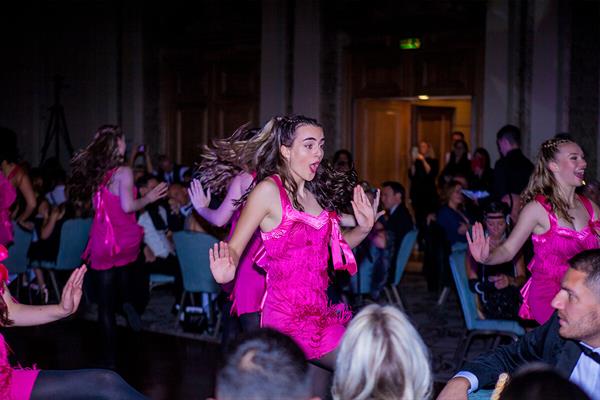 A woman who lost her two-year-old daughter to a brain tumour has hosted a glamorous charity ball, raising thousands to help fund research to find a cure for the disease.

Michelle’s fundraising comes after the loss of her two-year-old daughter, Lola Rice, who died in 2006, just days after becoming unwell. It was later discovered she had a rare ependymoma brain tumour.

The sell-out event was attended by 270 people who enjoyed a night of Gatsby-themed glitz and glamour. Guests were welcomed with a red carpet and Champagne reception, followed by a three-course meal and live performances, including from West End Kids (pictured). They also enjoyed casino games, as well as a raffle and auction.

Michelle said: “It really was epic, we’ve never done anything that spectacular before, but the reason I do it is because I want to raise money for Brain Tumour Research. I don’t want anyone to go through what we as a family have been through and I’m good at throwing parties so thought ‘let’s just put on the biggest party ever and make people pay to come’. The best thing about a charity ball is everybody wins – everybody went away happy knowing they’d spent money on a great cause.”

Charlie Allsebrook, our Community Development Manager, said: “We’re very grateful for the continued support of Michelle, and her family and friends. To raise £15,000 whilst having fun is a great achievement and will help fund vital research into brain tumours. She’s already busy planning her next Studio 54-themed ball for two years’ time and I look forward to hearing more about her plans for a light-up dancefloor, disco and Motown band.”