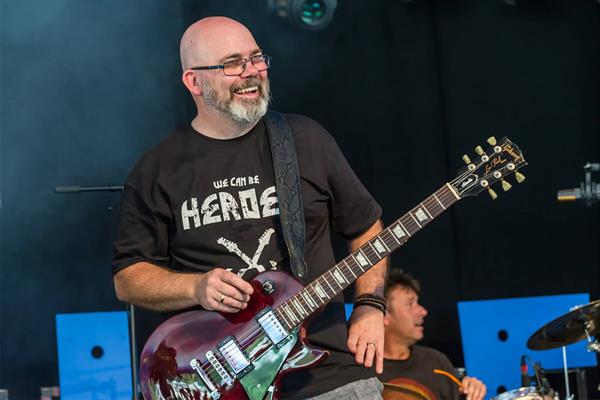 The family and friends of a dedicated fundraiser have raised more than £1,400 in his memory.

We were deeply saddened to learn that David Pile, a passionate Brain Tumour Research supporter, passed away recently.

David supported the charity after losing his mum June Irene Pile to a glioblastoma multiforme (GBM) in March 2013. June underwent surgery to remove part of the tumour and subsequent chemotherapy and radiotherapy, but sadly died less than six months after her diagnosis.

Following June’s death, David turned to fundraising for Brain Tumour Research to help find a cure for the disease. In May 2016, he abseiled down the Spinnaker Tower and two years later, in July 2018, he recruited nearly 200 musicians to play David Bowie’s anthemic Heroes at Ealing Blues Festival. The Great Guitar Challenge raised more than £3,600 for Brain Tumour Research.

At the time, David described the challenge as his “toughest” fundraising activity yet, but said it was “great to raise awareness of this dreadful disease in such a unique way”.

His incredible efforts raised enough to sponsor a day of research at our Centre of Excellence at Queen Mary University of London and place a special tile in memory of his mum on the Wall of Hope.

David’s loved ones are continuing his legacy and have now raised more than £1,400 in his memory.

Our thoughts are with David’s family, friends and all those who knew him at this difficult time.