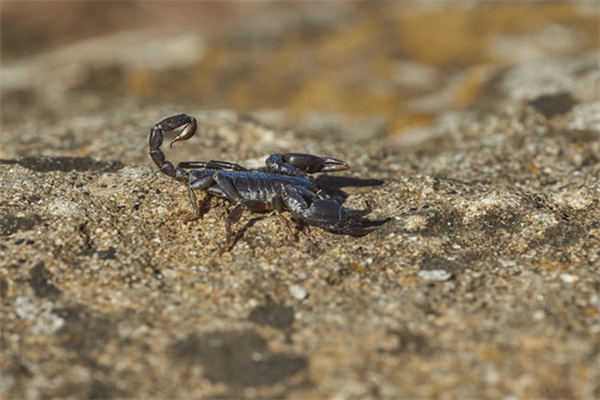 The toxic venom produced by Deathstalker Scorpions contains a multitude of compounds including amino acid chains known as peptides. One such peptide is called chlorotoxin due to its’ ability to inactivate chloride ion channels. It has been discovered that scorpion-derived chlorotoxin binds to glioma cells potentially slowing the cancer. This effect has been enhanced by adding a radioactive iodine molecule. The theory being that if the peptide binds to the tumour cell, it will strategically deliver radiation just to the tumour. In what was presumably good news for Deathstalker Scorpions everywhere this was achieved using a synthesised version of chlorotoxin. Although this is historic research there is an update because researchers in Seattle have found a way to attach fluorescent molecules to chlorotoxin creating ‘tumour paint’ that can light up gliomas allowing for greater surgical precision.

Research focusing on two different types of therapies used in combination appears to be highly effective against high-risk neuroblastoma. The first, CBL0137, is a compound called Curaxin, which is structurally similar to antimalarial drugs. The second is Panobinostat, a new type of compound known as a histone deacetylase inhibitor. In this research scientists tested whether this multimodal therapy could work synergistically with each therapy enhancing the anticancer effect of the other.

RNA technology has been used successfully in the battle against COVID-19 now, researchers are hoping similar technology can help fight brain cancer. This is a short piece about focused ultrasound being targeted, less invasive and able to cross the blood brain barrier and acting as a sort of Trojan horse for the RNA technology, which has been previously difficult to implement in the brain.

Here is a more in- depth explanation of a similar process of microbubble-enhanced focused ultrasound and the use of RNA to treat brain tumours. Scientists have been testing a type of RNA called small interfering RNA, or siRNA, as a brain tumour treatment. SiRNA can block the expression of genes that drive cancer growth. But RNA is fragile. To help it survive in the body long enough to have an effect, it has to be packaged in some type of microscopic carrier – hence the use of microbubbles.

In the US, May is Brain Cancer Awareness Month and in this piece David Arons, CEO of the National Brain Tumor Society, updates on the field of brain cancer research and talks about the latest changes brain tumour patients should be aware of, and what they can look forward to in the future. The article highlights several priorities that are being researched actively within our portfolio, such as developing new targeted therapies for glioblastoma and manipulating the metabolism of tumour cells.

It was in November 2017 that the National Cancer Research Institute (NCRI) announced Brain Tumour Research as their newest partner and at the time our Chief Executive, Sue Farrington Smith MBE, said: “This is a great news for Brain Tumour Research and will help to influence change as we work towards finding a cure for this devastating disease. It is a great testament to the passion and determination of our supporters who work with us. Our partnership with NCRI members will ensure that we are key players in the planning of new initiatives at the cutting edge of cancer research which will benefit all patients, including those with brain tumours. Patients will also benefit from the sharing of knowledge and experience in other areas of cancer research."

To finish this week, we have two bits of news from the NCRI firstly their CTRad Proton Beam Therapy Clinical Trials Strategy Group is currently inviting proton beam therapy research ideas for discussion and peer input at their next virtual proposals guidance workshop on 9 July 2021.

Secondly, there is a great book about immunotherapy called The Breakthrough by Charles Graeber and one of the central characters is the immunologist, and “charismatic, harmonica-playing Texan” James Allison. Thanks to the NCRI on June 21st there will be an opportunity to join a  conversation with… James Allison. Jointly chaired by Professor Rob Bristow from The University of Manchester (UK), and Dr Sophie Papa from King’s College London (UK), the focus will be on Dr Allison’s distinguished career including his award of a Nobel Prize in 2018 for his pioneering research in cancer therapy. He will share how this particular immunology research (amongst many of his other achievements) revolutionised cancer treatment when he discovered how to free the immune system to attack tumours. The conversation will also explore his current work that seeks to improve immune checkpoint blockade therapies and identify new targets to unleash the immune system in order to eradicate cancer, and cover Dr Allison’s interest in immune responses in cancer patients treated with immunotherapy. Not brain tumour specific but definitely something for anyone interested in the direction of travel for clinical care of all cancer patients.