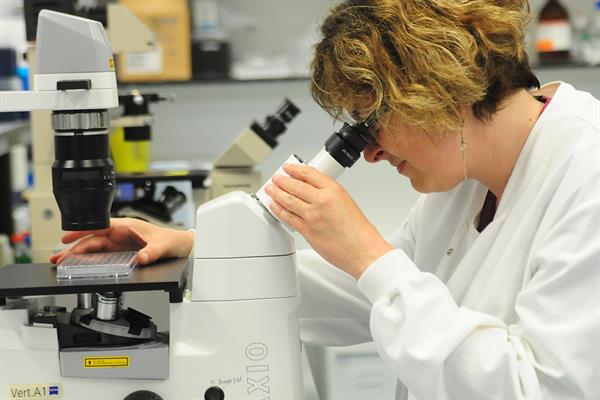 It’s a great thrill to begin this research update with news of a just published paper from Professor Silvia Marino and her team at our Queen Mary University of London research centre. Focused on the paediatric tumour medulloblastoma this has received significant interest in the media as it looks at a new way to starve cancerous brain tumour cells of energy in order to prevent further growth.

More specifically it concerns how Inositol treatment inhibits medulloblastoma through suppression of epigenetic-driven metabolic adaptation and the link to the paper in high impact journal Nature Communications is here. An extra dimension to this research is provided by Peter and Jane Gardiner, from Aston Clinton, near Aylesbury, who lost their 13-year-old son Ollie to medulloblastoma in November 2017. The family generously donated £187,000 to Brain Tumour Research and this money is funding post-doctoral researcher Sara Badodi who works alongside Prof Marino. As they have said movingly in media interviews they can’t do what they really want, bring Ollie back, but in his honour, they can fund research into the disease that so tragically killed him and create a pathway that will one day mean a paediatric medulloblastoma diagnosis has a brighter prognosis.

There was also widespread media coverage this week from the American Association for Cancer Research (AACR) Annual meeting as early findings show new drug could be ‘gamechanging’ for brain cancer treatment. A straw poll among our researchers concluded that this research was potentially interesting but it is too early to make a conclusive judgement and that we need to await data on more patients and publication of full results in a peer-reviewed journal. The findings have to be interpreted with caution (not an approach newspapers and journalists are renowned for) as it only includes 2 patients but the feeling was that this research is ‘onto something’ and that the future will hold many more immunotherapy combinations alongside other strategies. The consensus amongst the scientists who work with us is that this is a step in the right direction and part of a wider movement globally where more frequent and detailed tumour whole genome analysis and assessment of their immune microenvironment will be the foundation of more effective and bespoke treatment strategies.

Also presented at AACR last week were findings concerning a modified herpes virus, alone and in combination with radiation, that has been shown to be well tolerated with early signs of clinical effectiveness in paediatric patients with high-grade brain tumours, or gliomas. In Phase 1 clinical trial of 12 patients between 7 and 18 years of age, the investigators employed a modified virus known as G207, derived from the herpes virus responsible for cold sores. The virus is genetically altered so that it infects only tumour cells. When injected into a malignant brain tumour via a catheter, the virus enters the tumour cells and replicates. This kills the cell and releases the virus’s progeny to hunt out other tumour cells and induces a strong immune response, which can attack the tumour.

Many paediatric brain tumours are found in a region of the brain called the posterior fossa, with the most common site being the cerebellum. There are three main types of such brain tumours – ependymoma, medulloblastoma and pilocytic astrocytoma – and as the treatment and outlook for each is different, accurate identification of tumour type is important to help improve surgical planning.

The most widespread method used in current clinical practice to characterise these tumours is through acquiring brain MRIs, which are then assessed by radiologists. However, this qualitative analysis is often challenging, due to the overlapping characteristics of these three types of cancers. This makes diagnosis difficult without the added confirmation of biopsy. One possible solution is to use diffusion-weighted imaging, which measures the random motion of water molecules in tissues, revealing details of the tissue microarchitecture. This more advanced MR technique can provide quantitative information regarding the tumour, in the form of apparent diffusion coefficient (ADC) maps, with the aim of improving diagnosis. A UK-based multi-centre study focused on analysing ADC maps of paediatric brain tumours of the posterior fossa has been set up with the aim of accurately identifying tumour type, without the need for biopsy. To achieve this, the group employed machine learning techniques and have shown that it is indeed possible to discriminate between the three most common types of paediatric posterior fossa brain tumour.

With The Master's golf tournament concluding at Augusta last weekend, it is good to have news from the Head of the Seve Ballesteros Foundation Brain Tumour Group at the Spanish National Cancer Research Centre (CNIO), Massimo Squatrito. He leads a team that is proposing a novel therapeutic strategy based on the combination of temozolomide, and dianhydrogalactitol, a drug that is being tested in clinical trials and is already approved for the treatment of other tumours. In this just  published paper,  the researchers studied temozolomide resistance in depth by using glioblastoma cell lines in which several key genes were silenced. The results show that this resistance not only depends on the MGMT gene but that it may also be mediated by failures in the MMR (DNA repair) pathway so that when any of its components are altered, tumour cells accumulate mutations that give them the ability to evade the effects of temozolomide.

Tel Aviv University researchers made a ground breaking discovery which prevents glioblastoma from spreading. The researchers managed to achieve the breakthrough by detecting a failure in the brain's immune system. The failure in question stems from a protein called P-Selectin (SELP), which researchers used to restore the normal activity of the brain, blocking the spread of cancer.

Finally, a nice idea from our friends at the US charity the National Brain Tumor Society as this video should have you ‘informed in 30’ about precision medicine and targeted therapies for brain tumour patients

That’s it for this week but I wanted to make all of you aware of the #braintumourpetition report which was launched on Thursday. A powerful and emotive document, of which we are intensely proud, it can be viewed and downloaded here.