Keeping brain tumours in the news 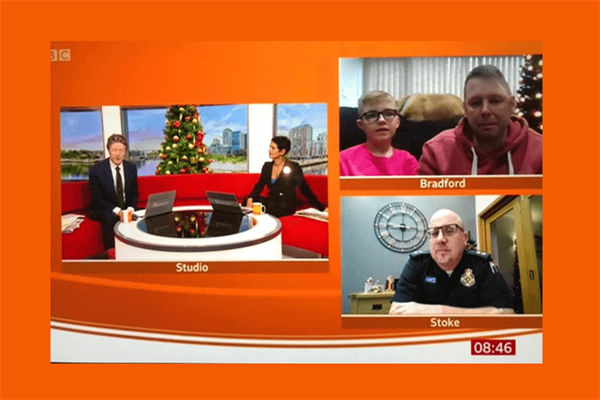 Appearing on BBC Breakfast, Gary Fordham and his son, Hayden, launched an appeal to find the heroes who came to their aid when Gary crashed his van on the M6 after suffering a seizure caused by a brain tumour. On the programme, Gary and Hayden were reunited with West Midlands Ambulance Service operations manager, Steve Rust, who praised the youngster for his quick-thinking action. The father and son have also been interviewed on ITV Calendar, BBC Radio Leeds and BBC Radio WM.

James King was diagnosed with a glioblastoma multiforme (GBM) in September, and underwent surgery to debulk the tumour. After chemotherapy caused James to lose his hair, his friends decided to show their support with a charity head shave to raise money for Brain Tumour Research. Their fundraising has been featured in The Mirror, Nottingham Post and Worksop Guardian.

After being diagnosed with a meningioma during lockdown, Ann Brown has shared her story in the Northern Echo. Ann and her family took part in Wear A Christmas Hat Day on Friday to raise money for vital research.

We can’t forget little Lyra Cole who released her new Christmas single, a cover of Shakin’ Stevens’ Merry Christmas Everyone, earlier this month. Lyra appeared on Good Morning Britain to launch the single and even received a good luck message from Shaky himself during an interview on Channel Five News! All proceeds from the single will go to Brain Tumour Research and you can download it here.

Thank you to all the supporters who have worked with Brain Tumour Research to raise awareness of this devastating disease If you would like to share your story, please contact our PR team: media@braintumourresearch.org