Lawyers in lockdown relay to help find a cure 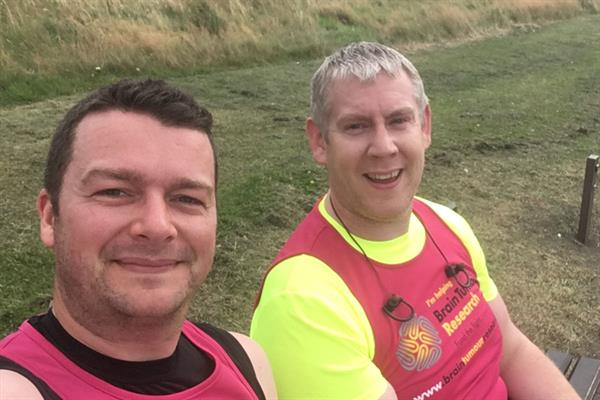 With the cancellation and postponement of many of 2020’s big challenge events – including the Virgin Money London Marathon - we have been continually amazed by the myriad of different ways our supporters have responded to the challenge of finding new ways of raising money for Brain Tumour Research.

Two lawyers, one from near Aberdeen and the other from Durham, who first became friends at secondary school 22 years ago, are a great example. Having heard that the progress of research into brain tumours was in jeopardy and seeing the launch of The 2.6 Challenge, they thought the fact that the two of them lived just over 260 miles apart, was too much of a coincidence. The very next day, 26 April, they set out on their epic relay.

Over 30 days, finishing on 25 May, Steve Allan and Dave Low, covered the virtual distance – the equivalent of 10 marathons – in relay, each running on alternate days.

Steve said: “I was inspired to take up running 12 years ago by a close mutual friend of Dave and mine who recently lost his fight with a brain tumour. On my first two or three runs for The 2.6 Challenge, early on in lockdown, I didn’t see a soul, not even a car, but it became a lot busier with people getting out for their daily exercise.”

Dave added: “After every run we sent a little: ‘tag – you’re it’ GIF to the other and tried to find the funniest one we could. We have also been trying to take a photo or two each time we’re out of something unusual. Steve definitely peaked early on sharing a selfie with a llama in a nearby field!”