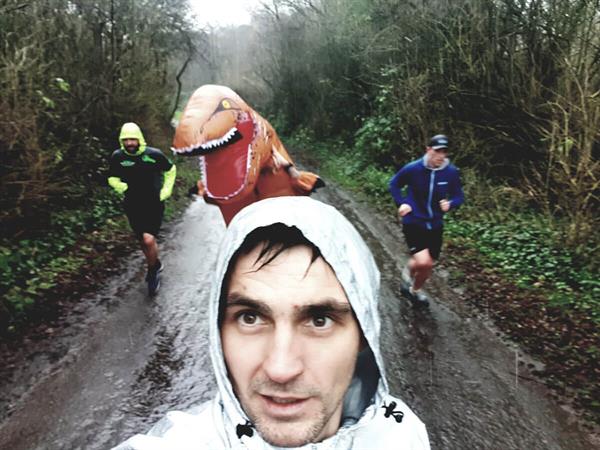 A civil engineer from Cheshire is running 5k every day this year, to raise money to help find a cure for brain tumours.

Rick Dickens, 36, has taken on a 5k run every day since 1 January and he has pledged to continue running the same distance on consecutive days until 31 December 2020.

The inspiration for Rick’s fundraising came after losing his close friend, Danny Jones, from Chester, to an aggressive, grade 4 glioblastoma multiforme (GBM). Danny was just 31 when he died in his wife Tara’s arms, after battling the disease for two and a half years. His diagnosis came just weeks after the couple discovered they were expecting their son Franklin in 2012.

Danny, who is also dad to Holly, 15, inspired scores of people to raise money for Brain Tumour Research in his honour, through a fundraising page called ‘Franklin’s Star’, set up by Tara.

Rick, who is dad to Barney, seven, and Penny, four, said: “Danny was an incredible guy.  He was one of the nicest blokes I have ever had the pleasure of meeting.

“I have fundraised for Brain Tumour Research in the past, completing the 75-mile Saltmarsh Ultra Marathon in 2015 and my daughter had all her hair chopped off to raise money for the charity too. I wanted to do something completely different this time, something that would push my boundaries and that would hopefully inspire people to dig deep.”

Rick is documenting his running streak with frequent updates on Twitter and Instagram @DadsRuns. He is completing one run a month in fancy dress and is encouraging people to suggest costumes for future runs. To donate go to: https://www.justgiving.com/fundraising/DadRuns