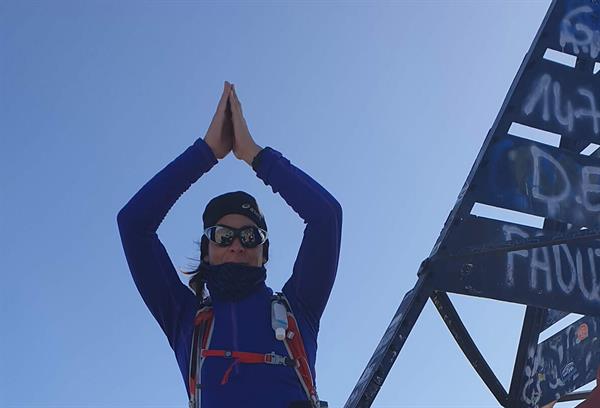 As she approaches the second anniversary of her shock brain tumour diagnosis, our inspirational supporter Sara Crosland has been featured in iNews.

On 20 February 2018, 44-year-old Sara Crosland’s life changed in unimaginable ways, when she was diagnosed with a 3.5cm acoustic neuroma , or vestibular schwannoma – a lowgrade brain tumour that affects around one in 100,000 people. Following a haemorrhage and major brain surgery that left her unable to walk, with impaired vision and balance, as well as permanent profound hearing loss and tinnitus, the mum-of-three from Ellesmere Port in Cheshire is now accomplishing more than she ever thought possible.

After gruelling surgery to remove the tumour, Sara was told that she would never ride a bike again. With the support of her family and following intensive physiotherapy, Sara is now cycling long distances. On top of this, since her operation she has hiked up Y Garn Summit in Snowdonia, climbed Mount Toubkal in Morocco and now she is in training for her first ever 100k ultramarathon in the Lake District in June, to raise money for Brain Tumour Research.

“Since my surgery, I have accomplished so much more than I ever thought possible. When I was lying in hospital hooked up to all sorts of machinery, if someone told me that within six months I’d be hiking up mountains and running marathons, I’d never have believed them, but it just shows what can be done if you refuse to give up”.

To donate via Sara’s fundraising page, go to: https://www.justgiving.com/fundraising/anwarriorsteam