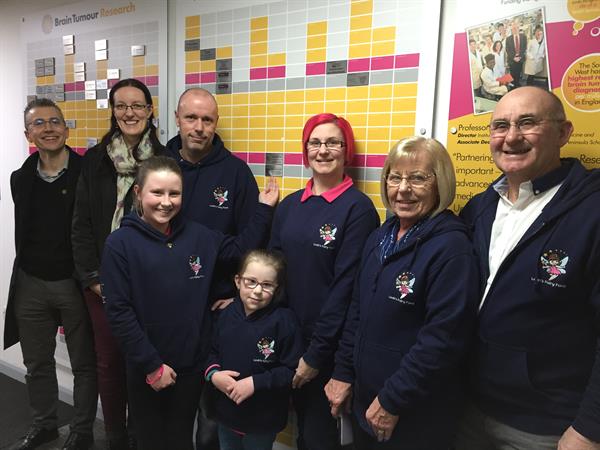 A Fundraising Group raised more than £20,000, inspired by a seven-year-old Brain Tumour Research supporter living with the debilitating consequences of a brain tumour.

Leah Martin, from Haytor Avenue, Paignton was diagnosed with a high-grade medulloblastoma brain tumour at the age of two. Several operations, as well as chemotherapy and radiotherapy, have left Leah with long-term side effects including problems with her speech and mobility. She undergoes MRI scans every six months to check that the tumour has not started to regrow.

Since Leah was diagnosed, her mum and dad, Joanne and Wayne, have helped to raise more than £21,900 for Brain Tumour Research. They have set up the Fundraising Group Leah’s Fairy Fund and have hosted a number of fundraisers, including sponsored fun runs, haircuts, body wax and shaves, as well as taking part in Wear A Hat Day.

Joined by her parents Joanne and Wayne, sister Jasmine, grandparents, Lesley and Alan and family friends Natalie and Adam Cook, Leah placed seven commemorative tiles on a Wall of Hope at the University of Plymouth, on Wednesday 29 January. Each tile represents the £2,740 it costs to fund a day of research at the university, where Brain Tumour Research funds a Centre of Excellence.

Joanne, 40, said: “I’m overwhelmed by the support we have received over the years and fundraising has given us something positive to focus on. It’s phenomenal to think that we have raised the equivalent amount to fund a week’s research at the university. I would like to say a massive thank you to everyone who has helped at events given up their spare time, donated and joined in the charity events.

“I was over the moon that the Paignton branch of Santander match-funded the money raised at our most recent fundraiser, a superhero fun run in June 2019. It’s thanks to the support of everyone in the local community that we’ve raised so much.”