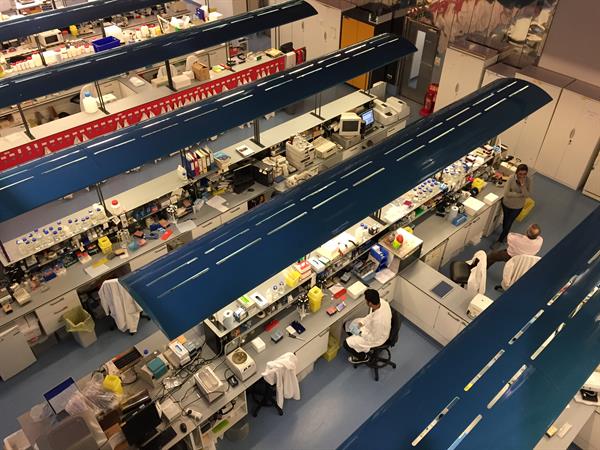 Prozac fights deadly childhood brain cancer Fluoxetine—the chemical name for the anti-depressant drug Prozac - could be used to tackle highly aggressive neuroblastoma, which is most common in young children. "Prozac has potential as a new and effective anti-cancer drug, but with less toxicity than current cancer treatments," said Professor Arturo Sala from Brunel University London

Another neuroblastoma story here new algorithm helps find treatment for brain cancer Researchers from Sweden’s Uppsala University have developed a new computer algorithm which combines massive quantities of genetic and drug data from European and American hospitals and universities. Researchers were astonished when the algorithm came up with completely new ideas for treatment and they believe that smart algorithms will be increasingly important in cancer research in the years ahead, since they can help scientists find unexpected treatment angles

Researchers at Montreal’s MUHC Research Institute are exploring a potential treatment for Glioblastoma which they say could extend the lives of 1,500 Canadians a year. Here is a news video clip  about this new treatment for brain cancer

It may seem obvious but a study has shown that surgical removal of the entire tumour may extend the lives of patients with a rare and deadly type of brain cancer called brainstem high-grade gliomas. Researchers analysed data from 103 patients in the United States who had either a biopsy (15 percent) or had surgery to remove part or all of the tumour (85 percent) between 1973 and 2015. Of those who had surgery, about 19 percent had total removal of their tumour. Median survival (median means half lived longer, half for a shorter time) after diagnosis was eight months for those who had biopsy; 11 months with partial tumour removal; and about 16 months for those whose tumour was completely removed. Survival among a small number of patients who had total surgical removal and other factors associated with longer survival -- such as younger age -- was up to four times longer than patients who had only biopsies

Cancer treatment has undergone a revolution in recent years. Each cancer case is now recognised as unique and the specific genetic mutations tumour cells carry are now sequenced to discover which chemotherapy drugs will be the best tumour specific treatment. However, certain types of cancer, especially brain tumours, are less accessible for genetic testing and until a sample is taken during surgery the tumour's genotype can't be found. This can significantly delay treatment. However researchers at Osaka University are peering into the genome of brain tumour having developed a computer method that uses magnetic resonance imaging (MRI) and machine learning to rapidly forecast genetic mutations in glioma tumours. The end result could remove the need for surgical tissue sampling, even more, it could lead to better clinical outcomes for patients as the process of delivering personalized medicine becomes easier and faster.

The brain is a fortress, equipped with barriers designed to keep out dangerous pathogens (a bacterium, virus, or other microorganism that can cause disease). But protection comes at a cost: These barriers interfere with the immune system when faced with dire threats such as glioblastoma. Yale researchers have found a novel way to circumvent the brain's natural defences when they're counterproductive by slipping immune system rescuers through the fortresses' drainage system. While the brain itself has no direct way for disposing of cellular waste, tiny vessels lining the interior of the skull collect tissue waste and dispose of it through the body's lymphatic system, which filters toxins and waste from the body. It is this disposal system that researchers exploited in a new study. People had thought there was very little the immune system could do to combat brain tumours, there has been no way for glioblastoma patients to benefit from immunotherapy – hopefully progress made at Yale can challenge that assumption.

Finally an illustration of the diversity of the research field where breakthroughs may come from is that Zika Virus’ Key into Brain Cells ID’d, Leveraged to Block Infection and Kill Cancer Cells. It turns out that the very thing that helps cancer cells become aggressive cancer stem cells is the same thing Zika virus uses to infect our cells.