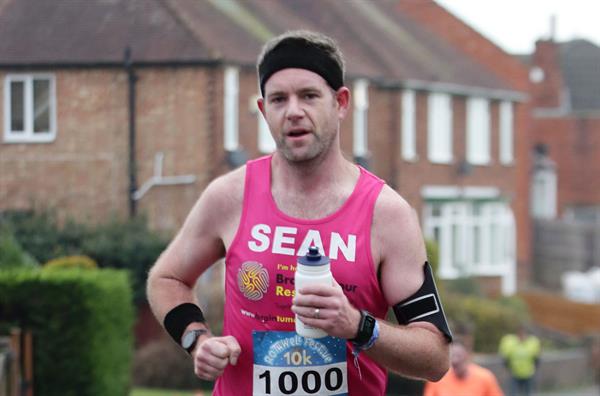 Huge congratulations to Sean Connolly, 35, who has chalked up 1,000 miles of running during 2019, despite having had to take several weeks off because of a cardiac scare.

Sean vowed to run this awesome distance to raise funds for Brain Tumour Research after losing his good friend, the former mayor of his home town of Rothwell, Northants, Alan Mills, to a brain tumour in July 2016.

A novice runner just three years ago who freely admits he didn’t run unless he was late for a bus, Sean appropriately notched up his 1,000th mile running the Rothwell Festive 10K on Sunday 29 December. He was cheered on by many of the new running friends he has made since he set out on this epic challenge and also celebrated taking over three minutes off his personal best (PB) for this distance.

During the course of 2019, Sean completed his first ever 35-mile ultra-marathon, The Shires and Spires, as well as the Berlin marathon and numerous park runs.

Sean said: “It’s such a great feeling to have succeeded in what I set out to do and I am proud to be raising awareness in memory of Alan

Not content with achieving his 1,000-mile goal, Sean has signed up to run the London Marathon again for Brain Tumour Research this year. He is definitely more than able to run for the bus now!