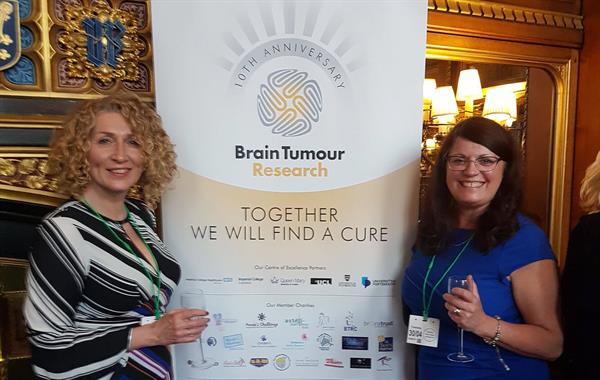 A woman from Dartford in Kent is facing her fears and pushing her body to its limits, as she pledges to take on 20 unique challenges throughout 2020, to raise money for Brain Tumour Research.

Karen McNamara, 53, kicked off her year of fundraising with a bracing sea swim at Dymchurch on New Year’s Day. She has at least one event planned per month for the rest of the year. The next one will be a two-day ‘spinathon’ at Broadway Shopping Centre in Bexleyheath. It will take place on 8 and 9 February in conjunction with Brain Tumour Research’s annual ‘On Yer Bike’ event.

Karen was inspired to embark on 12 months of fundraising by her friend, Wendy McMahon, from Mottingham, south east London. Wendy’s husband, Glenn McMahon, was 53 when he died in June 2015, having been diagnosed with an aggressive brain tumour in September 2013. Since his death Wendy has gone on to raise more than £60,000 in his memory.

Karen said: “Although I only met Glenn a handful of times, he absolutely knocked me back by how positive and upbeat he was despite his battle against all the odds.  After Glenn passed away, Wendy’s resilience continued to inspire me. I am in awe of how she has gone on to tirelessly campaign for Brain Tumour Research and set up the Glenn McMahon Foundation”.

Wendy, who will join Karen to take part in a number of events, said: “We’ve got an abseil in May, a wing walk and skydive in August and many more things in the pipeline. I am humbled by Karen’s efforts and delighted to be doing some of the challenges alongside her. I’ll stop at nothing to raise as much money as possible in memory of my lovely Glenn.”