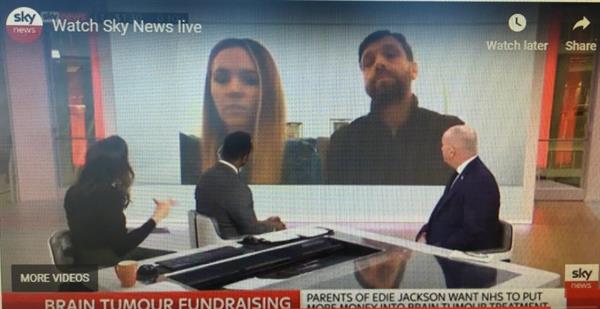 The parents of a six-year-old girl who has been given just six to nine months to live appeared on Sky News today to call for more funding for research into brain tumours.

Lois and Craig Jackson, from Waltham Abbey in Essex, have launched a desperate world-wide search for options for daughter Edie after being told there is no further NHS treatment available in the UK.

Edie was diagnosed with a diffuse intrinsic pontine glioma (DIPG) just four weeks before Christmas. She has just finished a course of chemotherapy and will have a post-treatment scan in six weeks’ time. The results will be reviewed by specialists at hospitals around the world to see what treatment options might be available. Family and friends have launched a GoFundMe page and a Facebook group called Edie’s Fight and £144,000 has been raised in less than three weeks.

Asked by presenter Gamal Fahnbulleh what his wish would be this Christmas, Craig said: “We would like funding to find a cure for all types of tumour. We would like to see a bit of money thrown at this terrible disease. The six to nine month prognosis we got for Edie is exactly the same families were getting 40 years ago and I find that staggering. It’s not just about us and our child, it’s about the next family that’s going through exactly what we’re going through.”

Brain Tumour Research spokesman Hugh Adams revealed that a child is diagnosed with DIPG every fortnight in the UK and called for increased investment in research to give hope to families who are devastated by the diagnosis of this uniquely cruel disease.