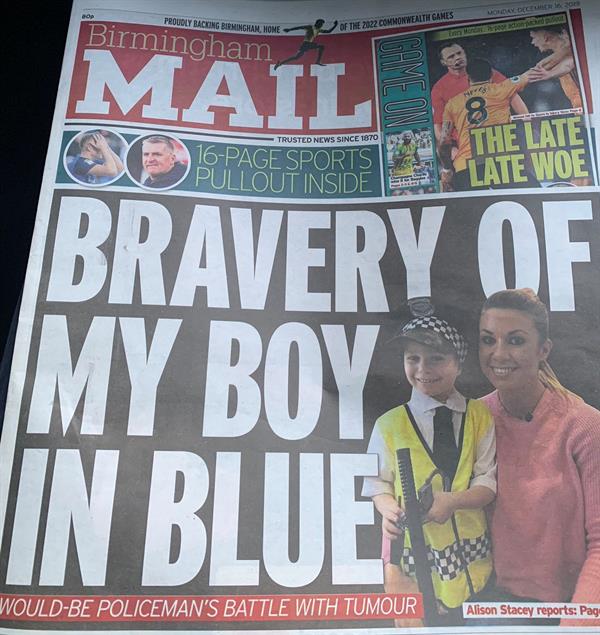 Six-year-old brain tumour warrior Bobby Humphries is making headlines in his home city, as he fronts our Christmas campaign to help find a cure for the disease.

Bobby, from Yardley, underwent surgery and chemotherapy for a large, low-grade glioma brain tumour when he was just two-years-old. His tumour stabilised but, unfortunately, in November 2017, it grew back and he faced another gruelling 18-month course of chemotherapy. He is now making a good recovery.

Bobby is the star of our Christmas appeal video, which he features in alongside his mum, Georgina. The brave schoolboy is seen opening a present under the tree and his mum talks about her delight at having her son at home for Christmas, for the first time in four years.

Their happy news is featured on the front page of the Birmingham Mail and on Birmingham Live, where you can also watch the heart-warming video, filmed in the Humphries’ family home. Georgina told the paper: “His cousins and his Nan will be coming around, and he’s been well enough to go and visit Father Christmas at the grotto. He’s also got his Christmas play at school, where he’s the narrator.”

We wish the family a very happy Christmas!