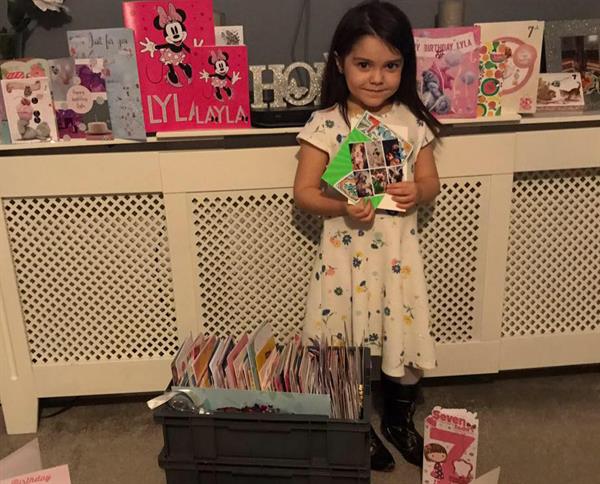 Our young supporter Lyla O’Donovan is celebrating a very happy seventh birthday today, as she has received more than 1,000 cards for her special day.

Over the past few weeks brain tumour patient Lyla, from County Durham, has been inundated with greetings cards and gifts from all over the world, after her parents issued an appeal for cards, to make their daughter’s special birthday wish come true.

Lyla was just three years old when she was diagnosed with a pilocytic astrocytoma brain tumour. Since then, she has suffered from endless complications and the family has dealt with a series of blows along the way. Lyla will undergo her 10th brain surgery in the New Year.

Now, as the heroic schoolgirl turns seven, she has not only received cards and presents from all over the globe, but also online messages of support from around the UK, including a video message from ex-footballer and TalkSPORT presenter, Micky Quinn and another from World Boxing Council (WBC) Flyweight World Champion Charlie Edwards.

Lyla’s dad Paul O’Donovan, a soldier with 8th Battalion the rifles (8 Rifles) said: “My wife Kirsty and I want to say a massive thank you to everyone who has wished her a happy birthday and sent cards and gifts. She has had post from as far away as Australia, Iceland, Canada, USA, Iraq and Hong Kong! Seeing her little face light up every time the postman arrived has been priceless. As a family we are overwhelmed with the kindness of strangers”.

The birthday fun doesn’t end here for Lyla. This evening she and Paul will attend The Gazette Community Champions Awards 2019 in Middlesbrough, as she has been named as one of four finalists in the running for a ‘Champion Child of Courage’ award.

Community fundraising manager for the north of England, Matthew Price, said: “Lyla is such a courageous little girl and she and her family are in our thoughts as she faces yet more brain surgery. When we heard about Lyla’s birthday card appeal, we were delighted to be among the first supporters to pop a card in the post for her. On behalf of everyone at Brain Tumour Research, we would like to wish her a very happy birthday and best of luck for the awards ceremony tonight.”