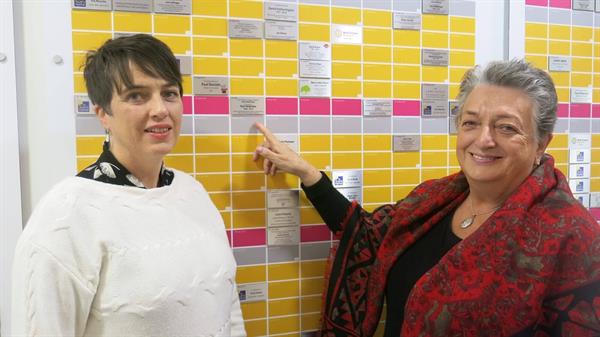 A grandad-of-five lost to brain cancer was remembered at a research centre where scientists are searching for a cure for the disease. Tom McEntee, a banker who lived in Epsom, died two years after his diagnosis with a highly aggressive type of tumour, despite undergoing several operations, chemotherapy and radiotherapy. He was 67 and left his wife Anne, their three children Niamh, Owen and Colette, and five grandchildren.

Marking the fourth anniversary of his death, Anne and Niamh paid tribute to Tom by placing five commemorative tiles on a Wall of Hope at  Queen Mary University of London (QMUL). The charity Brain Tumour Research funds a research centre at the university.

Each tile placed represents the £2,740 it costs to fund a day of research and celebrates the fundraising achievements of the family, who has raised more than £16,000 for Brain Tumour Research to date.

Anne, 70, who lives in Epsom, said: “Since Tom died, fundraising has helped keep his legacy alive. My friends, family and I have taken part in a number of charity events, including abseiling Portsmouth’s Spinnaker Tower and hosting bingo nights, music evenings and car boot sales. I also cut off most of my hair and dyed it pink to help raise awareness on Wear A Hat Day.

“Each tile has a special individual message from Tom’s grandchildren, Ciaran, Marcus, Paddy, Celia and James, aged between five and eight.”

After the tile placing, Anne and Niamh attended a lab tour led by Professor Silvia Marino and her team, who are studying  glioblastoma multiforme (GBM) tumours – one of the most aggressive types of brain cancer and the type that Tom was diagnosed with after suffering from tingling sensations in his arms and feet.

Anne added: “When Tom was diagnosed with a GBM, we had no idea of what we were facing or the devastation that lay ahead of us. It was a dreadful blow to our family and his bleak prognosis was totally life-altering.

“The hardest part about losing Tom is the silence. I miss his infectious laugh which filled our house with happiness. When something happens in my life, good or bad, the one person I want to tell isn’t there.

“Niamh and I were moved to attend the tile placing a day before the anniversary of Tom’s death. The lab tour was a fascinating insight into the research being undertaken at QMUL and it was wonderful to meet Prof Marino and her team.”