Human to human: the ultimate goal for brain tumour research 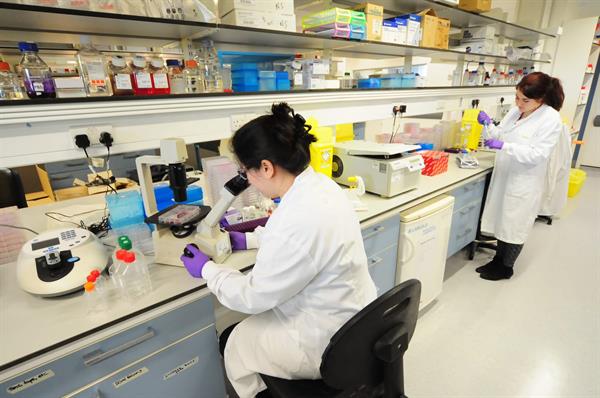 30 October 2019
Malignant brain tumours remain incurable, and a new study expresses concerns that part of the reason may be because scientists have no choice but to use mice in order to test their theories before taking them in to human clinical trials – yet a mouse brain is significantly different enough from a human brain to potentially give misleading results.
The study was conducted by a global collaboration of researchers in the USA, UK, Italy, France and Israel and focused particularly on an area of the brain called the cerebellum, found at the back and base of the brain. They identified two different groups of cells that appear as the human cerebellum develops, which are not present in the brain of mice nor of macaque monkeys, another species sometimes used in neuroscience research although not in brain tumour research.
Their findings are of particular relevance to research into the most common malignant brain tumour of childhood, medulloblastoma, which tends to arise in the cerebellum.
The question of how best to study brain tumours is a huge challenge and a regular theme of brain tumour conferences. Models of some parts of the brain can now be cultured from human cells donated during surgical procedures, but scientists have yet to achieve the goal of creating a complete all-human brain model for laboratory research in which to test tumour development and treatment.
The ultimate goal of the scientific community is to reduce and eventually replace the use of animal models in brain tumour research and, by virtue of using human cells, accelerate progress towards finding a cure for brain tumours.

Indeed, researchers at our Centre of Excellence in the University of Plymouth has developed a ‘fast-track’ process for screening new potentially therapeutic drugs using human brain tumour cell cultures.