Our patron John Bercow to stand down as Commons Speaker 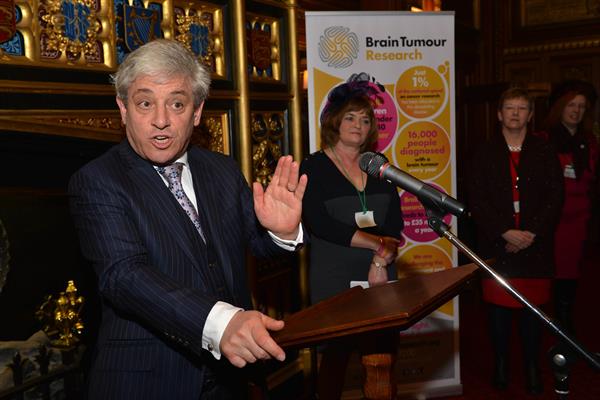 10 September 2019
After 22 years as MP for Buckingham and 10 years in the Speaker’s chair our patron The Right Honourable John Bercow MP announced yesterday (Monday) that he will stand down as Commons Speaker and MP at the next election or on 31 October, whichever comes first.
The brain tumour community have much to be grateful to Mr Bercow for, as our Chief Executive Sue Farrington Smith MBE explains;
“I first met John (my constituency MP) in January 2004 at his surgery, where I brought to his attention the hopelessness of the situation for people with brain tumours, having lost my sister’s little girl to a brain tumour in June 2001, three weeks before her eighth birthday.  He quickly took up the mantle and held the first ever debate in the House of Commons on the subject of Brain Tumours in April 2004.  John went on to hold a Parliamentary reception and then in July 2005 established the brain tumour APPG (All Party Parliamentary Group) with my support.
The APPG continues to flourish and is a vital platform as we campaign for change.
John’s hospitality in hosting annual events for our community at Speaker’s House has given us further opportunity to make our case at Westminster and to thank many of our loyal supporters, member charities and fundraising groups for their support.

I extend my sincere gratitude to John for all that he has done on our behalf and look forward to his continued support.”

Shown above is John Bercow addressing a Brain Tumour Research reception at Speaker’s House in 2016 flanked by Sue Farrington Smith MBE and Helen Jones MP Chair of the Petitions Committee. Their report into brain tumour research in the UK was published the same year.