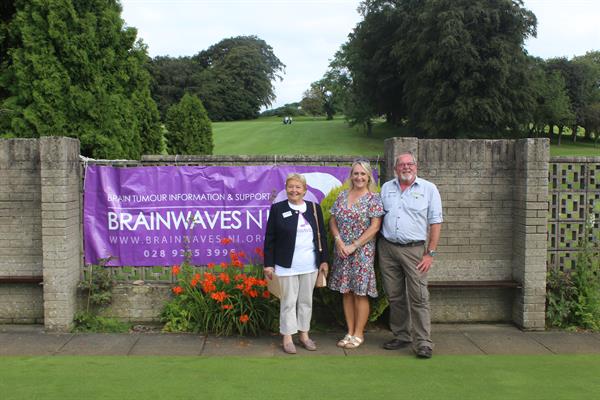 Member Charity Brainwaves NI has been selected as charity of the year by Eve McCracken, the current Ladies Captain at Knock Golf Club. Eve’s sister passed away with an undiagnosed brain tumour. Eve had set up incentives and events in aid of brain tumour support prior to the announcement, with the first fundraising incentive being the ‘Brainwaves Bunker’. She dedicated a bunker on the course and all golfers who hit a ball into the bunker were asked to make a donation to Brainwaves NI.

Eve also organised a fashion show which was held at the golf club in April this year. All the outfits were provided by a local women’s clothes shop. Local television presenter Pamela Ballantine hosted the evening and the charity’s secretary Gordon Dickson attended the event to speak about the charity and help with the raffles at the end of the evening.

Brainwaves NI’s aim is to provide support and information to all those affected by a brain tumour: patients, families and carers. It was set up in 1992 by patients and carers and received charitable status in 1994. Kate Ferguson MBE is one of these founding members after her husband Billy was diagnosed in 1992 with a very rare brain tumour, normally only seen in children.

Brain Tumour Research supports and is supported by numerous official Member Charities from across the UK that are united with us under our national banner. We embrace these collaborations and welcome any and all new Member Charities. Our collective voice carries greater weight in media coverage and adds weight to our political campaigning action. Our Member Charities are helping us build a game-changing network of world-class Research Centres of Excellence in the UK.