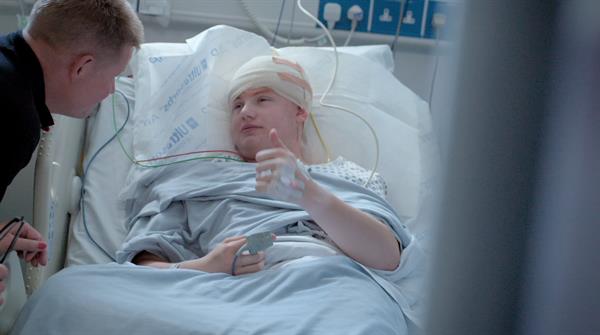 Soldier Cameron Ray was in training to become an army medic when he went from being at the peak of his fitness to feeling so ill he could barely get out of bed.

He was taken to hospital and referred for a brain scan which revealed an abnormality. More tests followed before he underwent surgery to remove the tumour, a grade 3 anaplastic astrocytoma which had grown to the size of a ping pong ball.

Cameron, now 21 and recovering well, was talking on BBC Breakfast today about his experiences and the operation, an awake craniotomy, which was filmed for the BBC Two series Surgeons: At The Edge of Life which is broadcast tomorrow, Tuesday 9 April.

He said: “In many ways a brain tumour is an invisible disease – if you have breast cancer or testicular cancer you can see or feel it but no-one would have known I had a brain tumour had it not been for the fact I fell ill with something else.

“It seems unfair that so little money has been invested into research and I want to do my bit in making people aware of these issues. I also want people to feel that it’s OK to talk about brain tumours.”