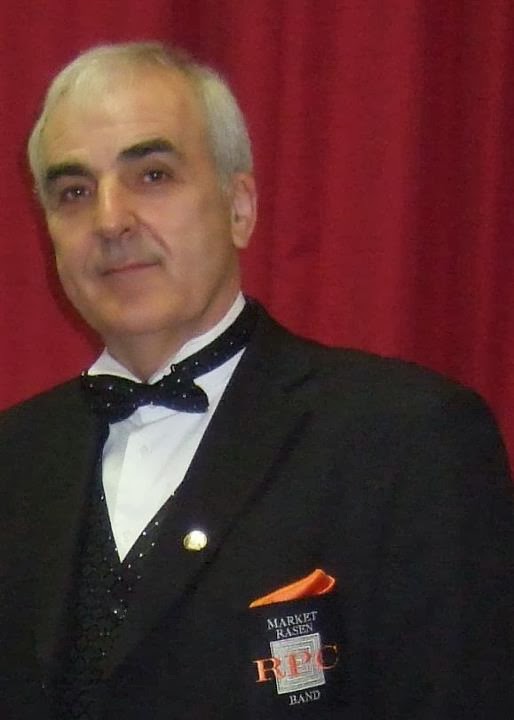 The New Year began with great sadness as we heard the news that Alan Needham, an inspirational man who did so much to raise awareness of brain tumours and funds for research, had passed away on 2nd January. We loved him for his larger than life personality and his incredible sense of humour, even knowing his time was so limited.

Alan was a healthy, active man. He worked for over 30 years in Her Majesty’s Prison Service, but was best known for playing in, conducting and directing brass bands across South Yorkshire and Lincolnshire. He learnt to play the euphonium as a very young boy and joined his first band at the age of eight! Alan spent more than 40 years as a member of the Polypipe Rossington Band.

Alan was cruelly diagnosed with a glioblastoma multiforme in 2014 (or “Tommy, the uninvited guest” as Alan liked to call his tumour), just a year after meeting Sarah, his partner and soulmate.

Despite the grim prognosis, Alan was determined to live what life he had left to the full. He continued to work in his beloved garden for as long as he could, sometimes taking five days to mow the lawn as he had to keep stopping to take a rest. He would go out for walks on his mobility scooter with Sarah and their faithful springer spaniel, Duke, and would regularly go away with them both, particularly to the Lake District and Northumberland to enjoy the scenery.

Alan also enjoyed spending time with his family – he was very proud of his two sons, Darren and Andrew, and his three grand-daughters. His Facebook posts were legendary in their humour, often describing scrumptious meals he had enjoyed with a much loved member of the family (frequently his brother Ray) – eating was clearly another of his passions.

Shocked by the brutality of his prognosis – he was told he had 12 to 18 months – and the fact that treatment for brain tumours was so limited (and had barely changed for decades) Alan’s fundraising campaign included amazing support from a whole raft of family and friends, as well as many members of the brass bands in which he had been involved. Incredibly, Alan inspired more than £21,000 to be raised for Brain Tumour Research.

To initiate his fundraising campaign, an All Star Brass Band, boasting 48 players from 10 different brass bands, came together for a special Wear Your Hat concert on 28th March 2014 – Wear A Hat Day. Alan was proud to be there at the helm, conducting the concert and wearing a splendid hat!

Special mention also needs to be made of the Dronfield Brass Band, of which Alan was musical director, who took Brain Tumour Research on as their charity of the year in 2014 and raised an awesome sum of more than £9,000.

Alan explained the reasoning behind his efforts for Brain Tumour Research: “I wanted to help make a difference even if it’s too late for me. It has been quite humbling – the fundraising support I have received from family and friends and particularly the brass band community.”

Sadly, as Alan’s illness progressed he was able to participate less and less in the brass band scene. He was only able to stay and conduct for just a couple of numbers at a concert held by the Boobs and Brass Band (made up of nearly all women) in 2016, before he had to go home to take medication and rest.

Alan recalled: “This was sad because it meant that I missed the presentation of a lovely yellow rose, specially named ‘Alan Needham’ from my banding colleagues. Thankfully my brother Ray was able to accept the wonderfully thoughtful gift on my behalf, which now has pride of place in my garden.”

A few days before Alan passed away, having turned 65 only in November, Sarah posted these beautiful words on Facebook: “It'll be four years on 11th Jan since you were first taken poorly and that's one hell of an achievement!!

We've all been on a bumpy ride, with you leading the way and our family and friends alongside us. The journey (you'd so hate me using that word) and you have made me who I am today (and given me grey hairs!) and will influence the rest of my life. I'm braver, more patient and more compassionate for us being together and for that I will always be grateful.”

A beautiful tribute to an amazing man, who touched so many people’s hearts.

Less than 20% of those diagnosed with a brain tumour survive beyond five years compared with an average of 50% across all cancers.

If you would like to give a donation in Alan’s memory, please go to https://www.justgiving.com/fundraising/alan-needham