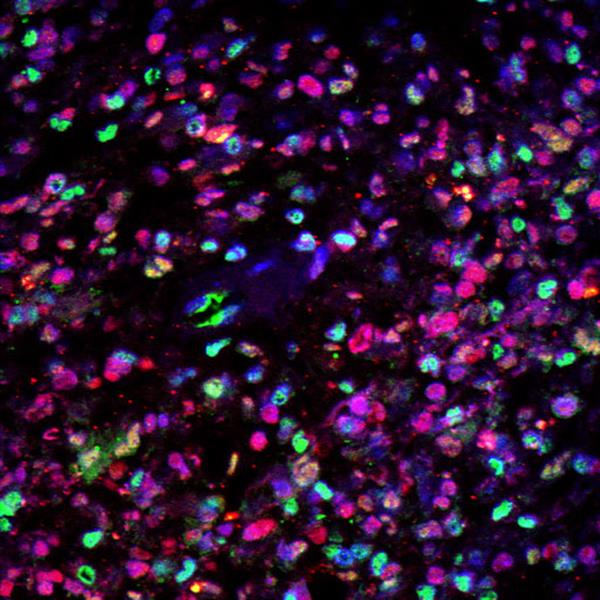 Cell division is a key component of tumour growth and the development of new drugs to prevent this could halt tumour development. One of the key components of this process is the telomere that is responsible for the physical separation of the two cells that have been generated following cell division. Researchers at the Spanish National Cancer Research centre (CNIO) have shown that it is possible to block the growth of human and mice glioblastoma in mouse models by blocking the TRF1 protein that is an essential component of the telomere protein complex. The study describes a new and promising way to combat this type of brain tumour by attacking its ability to regenerate and divide indefinitely

GBMs develop from star-shaped brain cells called glial cells and are particularly known for their ability to regenerate.  The tumour contains a subset of cells with characteristics that are similar to stem cells, called glioblastoma stem cells (GSCs). These cells are expressed primarily during the early stages of brain development when the cells are still dividing. However, they can also give rise to brain tumours.  It is possible for one of these cells to generate an entire tumour. This is one of the reasons why they are so difficult to treat. Research at our Centre of Research Excellence at Queen Mary University of London is focused on understanding the role of tumour stem cells in the development of brain tumours.

Marie Blasco, head of the study published in the journal Cancer Cell says: "We see that inhibiting TRF1 may be an effective strategy for treating glioblastoma both by itself and in combination with current radiation and temozolomide therapies.”

While the research carried out at CNIO is at its early stages, the results are promising and demonstrate a potential new target for future therapies. Although, the study presents positive outcomes it will take a long time until it can move from mouse models and be assessed in patients as part of a clinical trial.